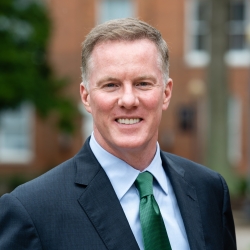 Kevin O’Neill holds a major in Political Science from Marietta College, where he was a member of the 150th graduating class of 1987. He joined the Marietta Board of Trustees in 2016 to support a place he says has enriched his life in so many ways.

As an undergraduate, O’Neill rowed, played basketball, and was a member of the Lambda Chi Alpha fraternity. He also participated in work-study as an admissions office tour guide and as a campus security officer. It was during his tours showcasing the college where he built a true understanding of and appreciation for all Marietta has to offer. Like many students whose family didn’t have a lot of extra resources, Kevin was offered significant financial aid and scholarships so that he could attend Marietta. His MC liberal arts education and dedicated professors supplied him with a well-rounded education experience from which he has drawn upon throughout his adulthood and impressive business career. He says he was taught not what the answers are, but how to get the answers.

O’Neill is the founder and managing partner of Acertitude, LLC, a purpose-driven executive search firm on a mission to unleash human potential. The launch of Acertitude builds on his leadership of O’Neill Consulting Group, which he founded in 1996 and is a current three-time honoree on the Inc. 5000, the most prestigious ranking of the nation’s fastest-growing private companies. Kevin is quick to trace much of the success he has achieved to the time and interest that his Marietta professors invested in him in the 1980s. “Many seeds were planted by professors who took an interest in me when I was a young man with a lot of questions and not a lot of answers. It is amazing how many of those seeds have sprouted and are growing decades later. I will be forever indebted to those professors and the longblue line of Marietta College of which I am now a grateful member.”

O’Neill spent his early career in client management roles with investment banks Merrill Lynch and Kidder, Peabody & Co, and a major search firm in Philadelphia. Kevin has served as board chairman of the American Heart Association of Southeastern New England, board member of the YMCA of Greater Providence, and as president of his church Parish Council. He served on the board of Cargenix, LLC.

In his free time, Kevin devotes his time to his wife Chantel and four teenage children and to his Rhode Island community. When his whirlwind schedule permits, you’ll also find Kevin in activities ranging from enjoying a cigar while boating along the New England coastline to aggressively training for road races and triathlons.