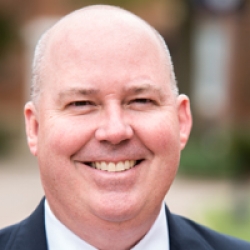 As a Vice President, Tom is a member of the College's senior leadership team and is an active participant in the strategic and long-range planning for Marietta College. In his current role, Mr. Perry oversees a dedicated and talented team that develops the College's marketing, communication, and public relations plans. His other tasks include managing crisis communication, developing talking points for campus partners, writing a variety of stories for online and print publications, producing news releases and editing all types of documents. He also works to advance College goals, promote and enhance the image and visibility of the College, and to provide marketing, public relations, media and publications support for all Marietta College offices, departments, programs, and services.

He is also an editor and writer for the College's award-winning magazine, Marietta, The Magazine of Marietta College. Mr. Perry is part of a team that won a Gold Medal in the 2008 CASE Circle of Excellence Awards for Magazine Publishing Improvement.

Mr. Perry previously worked at Marietta College as Sports Information Director from 1996-99. His other experience includes being the City Editor at both the Zanesville Times Recorder (2001-03) and The Marietta Times (1999-2001), Sports Editor at The Times (1993-96), Sports Reporter at The Times (1992-93), and as a freelance reporter for the South Florida Sun-Sentinel (1989-92) and The Miami Herald (1987-88). He has won numerous awards from The Associated Press and Gannett Corp., for his work at The Times and Times Recorder. He was also part of 10 CoSIDA awards during his three years as Marietta's Sports Information Director.

He and his wife, Traci, reside in Marietta, Ohio, with their daughter, Taylor, and son, Will.