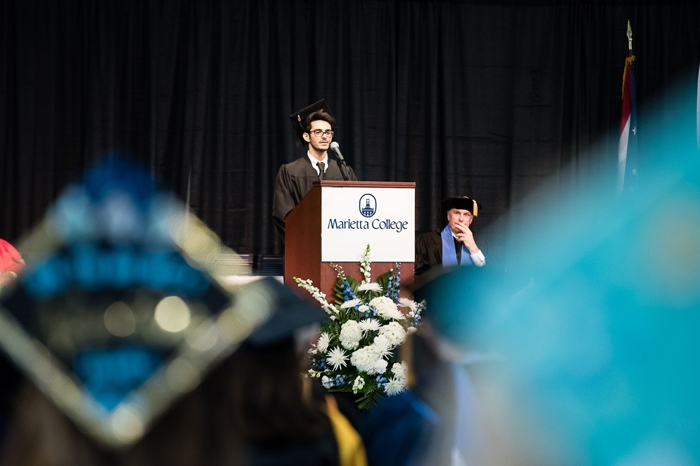 Four years ago, students from across the country and the world converged on this quaint little river city to begin a truly remarkable journey.

From the moment the Class of 2018 signed their shared matriculation book, their paths took many different, life-changing routes, but eventually led them to the stage they will cross on Sunday, May 6th.

Marietta College’s 181st Commencement ceremony will recognize more than 250 students — including 257 undergraduates and five graduate students — for their academic achievements and officially welcome them as members of The Long Blue Line.

The Jewett Orations will be delivered by Samantha Welch, who earned second place with her speech, “Oh, You Don’t Know the Places You’ll Go!” and Baffour Nkrumah-Ababio, who won the competition with his speech, “Our Kente Experiences.” Evan Hensel will be recognized as the class Valedictorian, and Alexander Gruss will be recognized as Salutatorian.

This year’s Commencement speaker is Donald G. Ritter ’81. Ritter is the founder and CEO of Endurance Resources. Ritter and his wife, Leslie Straub Ritter ’85, who serves on the Board of Trustees, donated $1 million to start a Music Therapy program at Marietta College, and also funded renovations to The Gathering Place and the McKinney Building, which included facilities that support the Music Therapy program as well as state-of-the-art recording studios for students interested in recording music. The Ritters will each receive an honorary Doctor in Humane Letters during the ceremony.Following the ceremony, students and their families are invited to receptions in Fenton Court and on The Christy Mall.