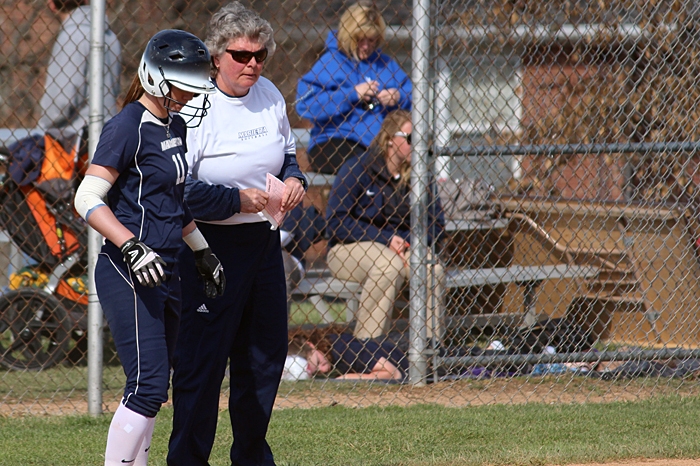 “I can never thank Marietta College enough for all the wonderful opportunities it has provided me over these last 31 years. I have had the pleasure of coaching hundreds of players and that interaction with the players and their families stand out as a real highlight,” said Arbuckle of her tenure. “To see players develop and grow, that has been my greatest joy. There have been some big wins and excitement over the years, but the real joy for me has been in the day-to-day interaction with the players and my fellow coaches.”

The driving force behind Marietta softball, Arbuckle compiled a career record of 571-529-3 (.519 winning percentage). She is the winningest coach in program history having led the Pioneers in all but eight of the school’s 39 seasons of varsity intercollegiate softball.

“It is a joyous yet selfishly sad day for Marietta athletics. We could not be happier for Jeanne as she retires from a rich and successful coaching career. But I, for one, will feel a great void when she leaves,” said Marietta Director of Athletics Larry Hiser. “It has been an honor to work with her. She never lost touch with her teams because she always respected each of her players as young adults outside of their roles as softball players. She used the sport to help them grow as people.”

On April 6, 2015, Arbuckle became just the third coach in OAC history to reach 500 career wins when the Pioneers swept a doubleheader from rival Muskingum University in New Concord. During her tenure, she coached 37 All-Region players and 76 All-OAC honorees.

Arbuckle’s success with the Pioneers can be traced to the countless hours she spent recruiting and teaching the game to her players, but she is quick to credit those around her.

“I’ve also had the opportunity to work alongside so many outstanding coaches, faculty and staff members over the years,” Arbuckle said. “Being a part of the Marietta College community has been an unbelievable experience. I can’t thank people enough for all the support I’ve been given over the years. It really does come down to the people, and I have been blessed to be surrounded by so many special people during my time here at Marietta.”

Hired in the fall of 1987 in the dual role of volleyball and softball coach, Arbuckle’s influence on campus extended far beyond the court or field. She took on a leadership position in the department in 1989 when she was named Senior Woman Administrator and Assistant Athletics Director.

Arbuckle was promoted to Associate Athletics Director in 2003 and took over as Chair of the Physical Education Department at the same time. Duties she fulfilled until her retirement. Arbuckle also served as Interim Director of Athletics for one semester.

“Coach Arbuckle is one of the hardest working individuals I have ever had the pleasure of working with. She has been a staple on this campus for a long time, and her presence and impact will be greatly missed,” said Marietta baseball coach Brian Brewer. “Along with the work ethic, Coach Arbuckle has demonstrated an undeniable loyalty to Marietta College and Marietta College Athletics. Coach was my academic advisor when I was a student here and has been my neighbor in the office suite for almost 20 years. I will miss her, to say the least.”

Serving as the head coach of two sports for 10 years, Arbuckle is Marietta College’s winningest volleyball coach with a career record of 172-158 (.521 winning percentage). She served on the NCAA Volleyball Committee for six of those 10 seasons.

“At the same time, she was a great colleague for her coaching peers, faculty and staff,” Hiser said. “Jeanne was a great communicator and advisor in all sorts of campus settings. She was especially good at helping academics and athletics find a healthy balance.”

“I would be remiss if I didn’t thank the College administration and former Athletics Director Debbie Lazorik, for all her guidance and support over the years. And thanks to Larry Hiser for his leadership over the past 10 years,” Arbuckle concluded. “The Athletics Department has experienced tremendous growth over the past 30 years and it has been very rewarding to have played a small part in that growth.”