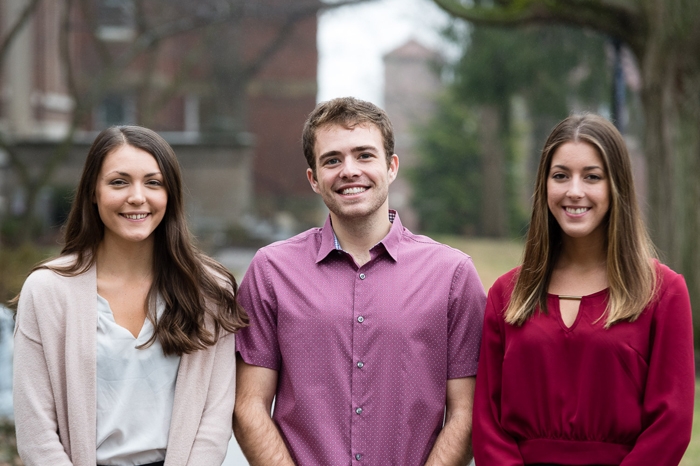 “Not only has this competition given me the opportunity to demonstrate my ability to work well as a team and exercise my public speaking skills, but it has also allowed me to network with business professionals and meet new people,” said the Marietta College Accounting student. “Additionally, through extensive research of Peoples Bank and the banking industry, I have gained a better understanding of financial institutions and how they do business.”

Marietta College’s team of Taryn Hicks, Alex Hogan and Tornes finished second at the competition and they received a $1,000 prize for their efforts. The contest was held at Marietta College and featured 15 other teams, including first-place finisher the University of Mount Union.

“I think the competition did go as expected,” Hicks said. “Our first goal was to make it to the final four and we did. We put a lot of hard work and dedication into this case and we expected that our presentation would be tough competition.”

“This competition included 16 teams from colleges and universities in Ohio, Pennsylvania and West Virginia,” he said. “Marietta's team had to analyze a three-faceted case including strategic issues in human resources, marketing and finance.”

Marietta prevailed over teams from Ohio Northern, Cleveland State and Oberlin to advance to the final round against Mount Union, Marshall and Ohio State.

“Although we were definitely shooting for first in the final round, I am still proud of my team for placing second,” Hicks said. “Out of 16 schools, some of which having very reputable business programs, I think that second place is still a great accomplishment for our team.”

Hogan said he couldn’t have asked for a better group to work with during this event.

“My team did incredibly well,” he said. “We knew exactly the competition that was going to be present, and when you hear names like Ohio State, Ohio University, Kentucky State the stakes increase. It is a weird feeling because we feel we had great ideas but not everything always goes as planned. What we can take from this is that we had the opportunity to show some big schools what little Marietta College is all about. If it weren’t for our incredible set of professors, we wouldn’t have made it so far.”

Each team received the case in November, which gave them adequate time to prepare for the one-day competition.

“When we came back to campus in January, our team began meeting two and sometimes three times a week,” Tornes said. “We came up with a game plan, split up the tasks and came prepared to discuss our ideas with one another. We spent a lot of time working on our individual parts outside of the meetings and gave each other feedback and ideas when we met again.”

Each member of the team agreed the experience was beneficial.

“This case undoubtedly challenged me in critical thinking and communication,” Hicks said. “It was so important to communicate with my team and Dr. Fazio. Another crucial factor was recognizing the resources available to us here at Marietta and using them.”

Hogan added, “Where else would I get the opportunity to dive into aspects of a respected business to give consulting advice with zero ramifications? I feel this was a great way for students to show their potential and gain the confidence to take on life after graduation.”

Chuck Sulerzyski, Peoples Bank President and CEO, said the bank is dedicated to investing in its communities through scholastic advancement and outreach.

“The Case Competition is an opportunity for undergraduate students from multiple colleges and universities to provide a solution to a real-world business scenario,” he said. “The competition allows Peoples Bank to familiarize ourselves with prospective candidates for employment and for students to become familiar with the Marietta area. We were thrilled to welcome 16 teams from 15 universities this year, and are looking forward to the competition growing next year.”