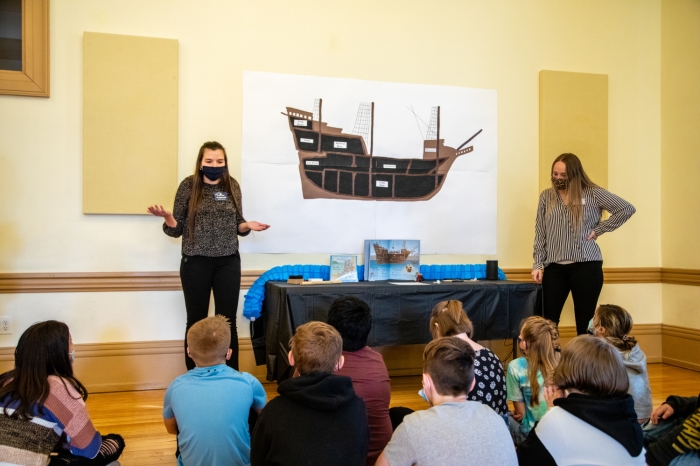 After dozens of fifth graders finished five different living history sessions pertaining to the Pilgrims, the Wampanoags and the first Thanksgiving, Dr. Cathy Mowrer called them from their stations in Andrews Great Hall to the center of the room.

“Can anyone tell me something they’re going to tell their parents tonight about the first Thanksgiving?” asked the McCoy Professor of Education. After one student chimed in “onion stew,” Mowrer praised the child’s answer and added that items in today’s Thanksgiving meals — pumpkin pie and stuffing — were not found on the first shared meal between the Wampanoags and the Pilgrims.

The week before Marietta Elementary School fifth graders were set to start their Thanksgiving break, they took a field trip to Marietta College’s campus to learn about the origins of the holiday and about the lives of the people who were involved in that first meal. Ten Special Education/Elementary Dual Preparation (SEED) interns from Marietta College conducted the stations, which focused on the Wampanoags, games that Pilgrim children played, the Mayflower, the daily life of a Pilgrim and the first Thanksgiving. About 150 grade school students attended one of three rotations at the College.

“We’ve been planning this program since the beginning of the semester,” said Jordan Taylor ’22 (Waterford, Ohio), a SEED intern. “Seeing the kids’ reactions makes it all worth it. Dr. Mowrer has given us so many great ideas that we can use in our own classrooms in the future, and that makes it so much more meaningful. I feel pretty confident about what I’m doing and I definitely owe all that to this school.”

The SEED interns were assisted by five Middle and Secondary Education majors. The sessions looked at how important the Wampanoags were to the Pilgrims, what types of chores children had to perform and what their schooling looked like.

“We are always trying to connect children with children because it’s more meaningful for them,” Mowrer said. “Every year, we do a project like this for the local elementary school and I think the children really enjoy it.”

Camryn Wilson ’22 (Cambridge, Ohio) was dressed as a Pilgrim at her station, which focused on daily life.

“I liked seeing their different reactions, and I noticed the more I was able to engage them, the better my presentation was,” she said.

Bethany Colvin ’09, a teacher at Marietta Elementary School, was excited to watch current Education majors interact with the children and develop the same skills she developed while a student at Marietta College.

“This was amazing,” Colvin said. “They learned so much more about this than they ever would have just sitting in a classroom. (The Marietta College interns) really brought the subject to life.”

Lexi Addis, 10, was lined up to leave with her class after the second rotation and continued to talk about the Mayflower and life for the Pilgrims.