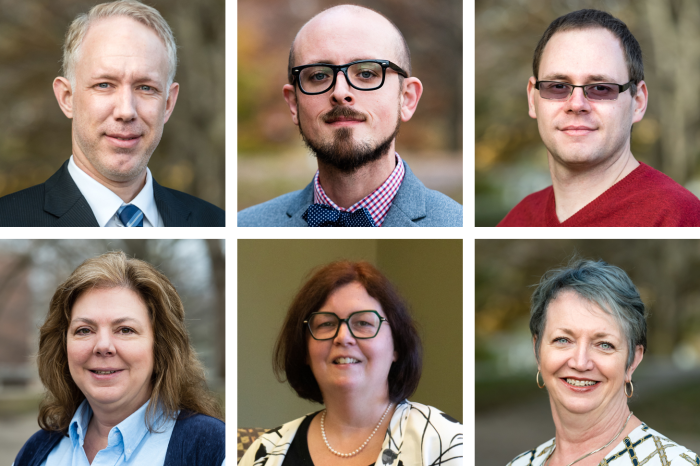 President Bill Ruud, in consultation with the Renewal, Tenure and Promotion Committee and Provost and Dean of the Faculty Dr. Janet Bland, and with the approval of the Board of Trustees, has recently promoted and awarded tenure to six faculty members.

“Faculty at Marietta College take the granting of tenure very seriously, as it is a career-long commitment to employment and support,” Bland said. “All candidates for tenure at Marietta College face a rigorous, multi-year review process from Renewal, Tenure, and Promotion (RTP) committee, and must meet our high institutional standards for teaching, scholarly activity, and service to the College.”

Downing arrived at Marietta in 2017 and has a focus on early American history, particularly native-white relations along the frontier. He has taught courses in U.S. History (both to 1877 and after 1877), Colonial America, American Revolutionary Era, Native American History, Atlantic World, Professional Historian, and Introduction to Public History. His current book manuscript is “‘Barbarous Tribes of Savages’: Violence and Conflict on the Periphery of Empire in the Colonial Mid-Atlantic, 1750-1776.” He earned his Ph.D. in U.S. History at the University of Cincinnati.

Karan arrived at Marietta in 2017 and primarily teaches in the fields of taxation, financial accounting and managerial/cost accounting. His research interests are in accounting ethics. Prior to joining MC, Karan taught at institutions in Florida and South Dakota.

Lockhart arrived at Marietta in 2018 following 20 years as a communication professional. This included 16 years focused on marketing, public relations, organizational communication, and creative direction in higher education at Ohio University and Washington State Community College. During that time, she earned multiple awards for marketing materials and worked collaboratively with several partner institutions in Ohio and West Virginia to co-market programs. In 2016, she worked as an academic coach in MC’s Academic Resource Center. She is also the Director of the Fundamentals of Communication Program and the Communication Resource Center. She earned her Ph.D. in Communication from Ohio University.

Perry arrived in Marietta in 2013 and was on the faculty for a short period before leaving to conduct some post-doctoral work. She returned for the 2017-18 academic year as the Executive-in-Residence. She returned in 2019 as a faculty member at the McDonough Center for Leadership and Business where she teaches classes on Leadership Studies and Ethics. She also serves as the Director of PIO 201 (the sophomore general education course) and is the faculty advisor for the Student Government Association (SGA). She has more than a decade of experience in clinical ethics consultation with several major hospital systems and has served as a leader on projects around perinatal and neonatal supportive care, addiction medicine, and racial justice in healthcare. She earned her Ed.D. in Philosophy and Pedagogy from Montclair State University.

Peterson arrived in Marietta in 2015 and has 35 years of experience as a consultant, project manager, senior drilling engineer, and, most recently, associate professor. She specializes in applying risk analysis and decision methods for economic models, full project development and optimization, cost and schedule models, and well drilling design. These models in turn provide the basis for selection of appropriate technology, strategizing terms and conditions, short- and long-range planning and budgeting, and risk management. She teaches Engineering Economics, Drilling Engineering, Drilling Fluids Lab, and Risky Business. She has the distinction of being the first female to earn a Ph.D. in Petroleum Engineering at Texas A&M University.  Dr. Peterson is also the first female to be a rig-site supervisor for Marathon in their International drilling department and the first female to teach Petroleum Engineering at Marietta College when she was an Assistant Professor from 1984-90.

“Tenure is an important element of faculty work in higher education — it’s at the heart of academic freedom and ensures independent research into areas of study that may be seen as controversial or groundbreaking,” Bland said. “Tenure allows college and university faculty the ability to conduct research and inquiry that is protected outside influence by donors, industry, political organizations, or government agencies — but subject to rigorous peer review by other experts in the field. Tenure protects faculty members from losing their jobs because someone does not like the questions they are asking or the direction a project is going.”