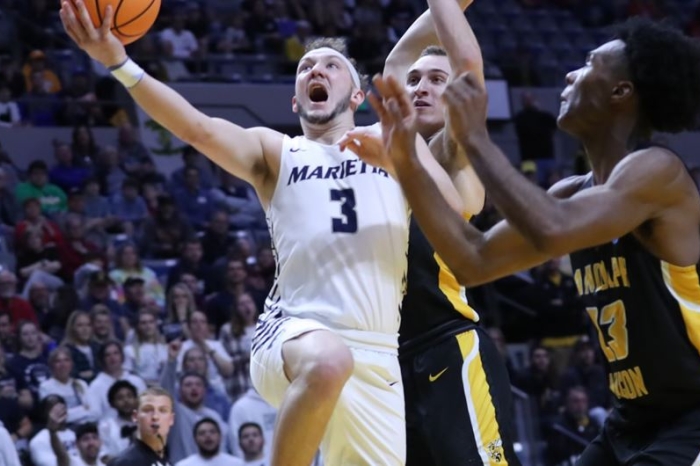 However, the more he thought about the talent that would be on the court for the Pioneers, he decided he wanted one more shot at winning an NCAA Division III national championship.

But he doesn't regret his decision one bit.

"I'd come back for a sixth if I could," said Ellis, who was held to nine points on 3-of-11 shooting. "The situation I got was awesome. Having the opportunity for guys like me to come back and do my fifth year, you can't even put it into words what this year meant to me. There was a time that I really wasn't going to come back. But then I decided to, and it's been incredible. I'd do it again if I could."

"I'd rather just talk about the game because I can remain non-emotional. But when you ask me to talk about these guys that's where it gets tough," VanderWal said. "We're just so frustrated that we didn't make the plays today, but I told these guys going into the tournament … no matter what happens, I'm going to be super proud of you. We've had an unbelievable year. (They've) accomplished things that nobody in Marietta basketball history has ever accomplished. I just don't want to have that talk for as long as I can, and today we're having that talk. The five seniors have meant the world to the program. You couldn't ask for better group of young men. They just do the work and compete."

And despite the final score, the Pioneers (29-3) battled in the semifinal game.

Randolph-Macon (32-1) never trailed in the game and went on a 17-0 run in the first half, but the Pioneers rallied and trailed by 10 at halftime (38-28). Then Marietta scored the first five points of the second half to pull within 38-33.

"I thought it was going to be Christopher Newport all over again, or at least that's what I was hoping for," VanderWal said. "We had a couple sets right out of the half and scored on both of them and cut it to five, and they just went on another run. We could just never go on a run ourselves."

Isaly added, "They did a really good job the first half keeping us from shooting the 3. We didn't really make too many adjustments at halftime. Just tried to find a way to get open and move the ball around a little bit more. They just have so much power. Every time we went on a run, they were able to fire right back at us. They are definitely a championship team."

Like the first meeting between these two powerhouse programs in November, Marietta didn't have an answer for senior Ian Robertson. He led the Yellow Jackets with 22 points, which included six 3-point baskets.

"We know who they are and what they are going to do. We knew what our game plan was going to give up," VanderWal said. "Ian Robertson continues to be our Achilles heel. I know he shoots 36.3 percent from 3 and averages seven points a game and against Marietta he's the best player in the country. Give him credit. He made all the plays. It's pick your poison with Randolph-Macon. They're just so talented and Buzz (Anthony) is amazing. You've got to stop him. Clearly not many people have figured it out. You've got to stop him, and you have to hope players like Robertson have an off day. Unfortunately for us, both times this year, he's had a great day."

"He's the most competitive guy," said RMC coach Josh Merkel. "He hunts competition and he lives in the gym. He loves defending."

Marietta never led in the game and was out-rebounded 39-35. The Pioneers were also outscored in the paint 30-24.

"Have to give a lot of credit to Randolph-Macon because they are just an unbelievable team," VanderWal said. "We needed to have more composure offensively and play better. They're the best team in the country."

The Yellow Jackets will get a chance to prove that Saturday when they face Elmhurst University at 6 p.m. in the championship game. Merkel likes his squad's chances.

"We have a lot of weapons, so it's really hard to take away one or two guys. We had four guys in double figures. We talked a lot about being a buzz saw at the end of the year. Just being at your best when your best is needed," he said. "My job is to kind of get out of the way. We got some really good players that are very unselfish that trust each other and love each other. I think that shows up in how we play. I'm excited for these guys to be moving forward."

Now VanderWal will go back to work and try to get Marietta back to the Final Four — and hopefully figure out a way to get that elusive championship.

"These guys have laid the groundwork, and the guys before them have too. We're standing on a lot of shoulders to get to this point. These guys have been extremely bought in. I tell everyone. I'm going to coach the team the same way just about every year," he said. "We have some guys who were in travel suits during the game who have been with us all year who are awfully darn talented, and they could probably start at some other places. And they are grinding this thing out at Marietta because they want to be part of this special program. They want to be like these guys. I think that's what makes our program special."

The Marietta players also wanted to thank the Pioneer fans, who made up a large part of the 4,500 who watched the game in person.

"Our community is amazing. We sell out almost every game. … I just want to thank our community," Lydic said. "Selling out games is uncommon at D3, and especially tonight they showed up, but we just couldn't get the W."

Isaly added, "We had an unbelievable crowd. We had fans from our hometowns who came over here just to watch us play. They really had our backs all year. There's nothing like playing in the BanJo. Putting on this jersey the past four years has been amazing. I want to say to everyone who disses D3, that if you find the right place that is special, and Marietta is a special place. It will always have a place in my heart."

Merkel was impressed with what he saw from Marietta this season.

"Ton of respect for (VanderWal), his coaching staff and the job they do and the program they have," Merkel said. "Those guys have a lot to be proud of. Someone has to win and someone has to lose. They've made us better."