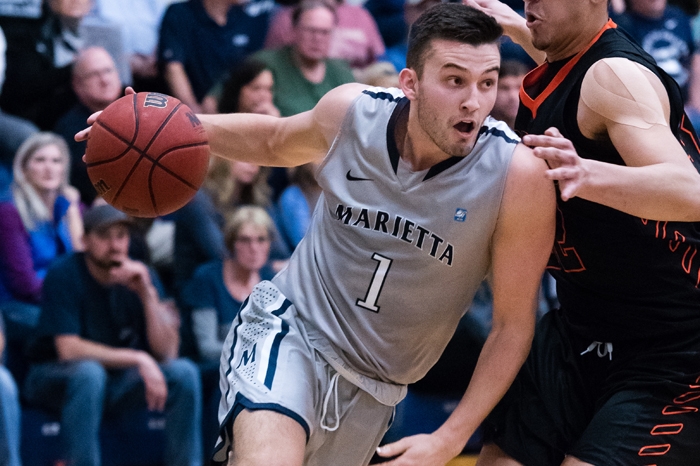 Marietta College men's basketball, who is ranked 13th in the 2017-18 D3hoops.com preseason poll, has been in the Top 25 for 42 consecutive polls — the longest streak in the nation in NCAA Division III.

The streak started with the December 8, 2014, national poll when the Pioneers cracked the poll at No. 25 after opening the season 7-0. Marietta moved up the rankings that season, getting as high as No. 3 and finishing eighth in the final poll.

“It's always nice to be ranked, and it's a huge accomplishment for our program to have the longest active streak in the Top 25,” said Jon VanderWal, who is entering his 11th season with the Pioneers. “However, it doesn’t matter what you are ranked in the preseason but rather what you prove during the season. I just want our team to focus on getting better every day and making progress toward being the best team we can be. If we take this approach, we will remain in the top 25 for a long time.”

Marietta, who is the preseason favorite in the Ohio Athletic Conference, will be tested this season as the Pioneers play one of the toughest schedules in all of Division III, including an opener against Hope College and University of St. Thomas. Marietta also has non-conference games with No. 4 Hanover, Frostburg State, Bethany College, La Roche and Wittenberg.

“Being ranked is obviously where we want to be and it's very exciting. It creates a buzz within the team, on campus, and in the community,” said senior guard Dillon Young, who averaged 10.6 points and 3.0 assists a game last season. “Although, we do our best to ignore it because rankings don't win us any games. Our coaching staff has done a great job of emphasizing this and letting it be known that the rankings come with a great deal of responsibility.”

VanderWal has compiled an impressive record since taking over the Marietta program in 2007. He is 190-90 and has led the Pioneers to three consecutive Ohio Athletic Conference regular season championships.

Young and fellow senior Connor McCreary have a three-year record of 79-13, including three trips to the NCAA Tournament.

“No matter where we are ranked we have to continue to work hard, prepare and stay focused on what got us to this point,” Young said. “Where we are ranked is rarely discussed, if at all in our program. We know that if we do what we need to then the rankings will take care of themselves and at the end of the season we will be where we want to. Our streak of rankings can be largely attributed to this approach.”

The next longest had been Whitworth at 36 weeks, but the Pirates didn’t crack the preseason poll. The second longest streak now belongs to the Christopher Newport Captains out of the Capital Athletic Conference. The Pioneers defeated Christopher Newport 74-50 in the early part of the 2016-17 schedule.

Earning the top spot in the rankings is Whitman out of Walla Walla, Washington. Rounding out the top five are Augustana, Williams, Hanover and Ramapo.