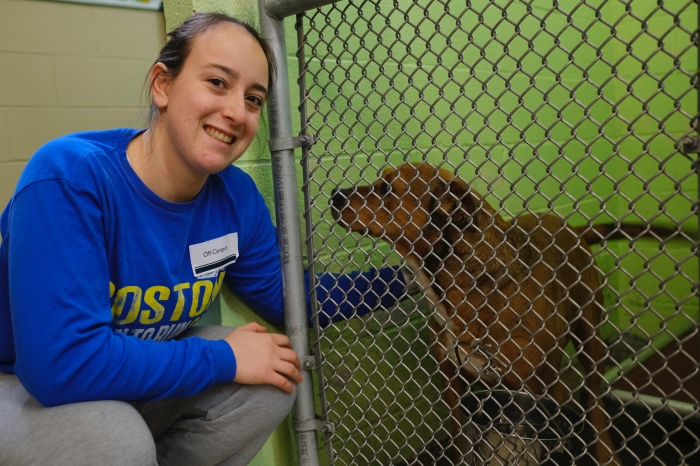 For a brief moment, Emileigh Mathis ’23 (Portsmouth, Ohio) stood in Dyson Baudo Recreation Center with friends Racheal Tingley ’23 (Tipp City, Ohio) and Jensen Greer ’22 (McConnelsville, Ohio), and reflected on why she chose to attend Monday morning’s Martin Luther King Jr. Day of Service rather than spend a day off of classes relaxing in her dorm.

“If it wasn’t for Martin Luther King Jr., I obviously wouldn’t be here today,” said Mathis, who is an African-American woman.

For the second year in a row, traditional classes at Marietta College were canceled and the campus community was invited to participate in a morning filled with service projects, student presentations and workshops geared at honoring the legacy of the late Rev. Dr. Martin Luther King Jr.

The event was coordinated by the Office of Diversity & Inclusion and the Office of Civic Engagement. Hundreds of people gathered in the DBRC to take part in the morning’s events, which included on-campus service projects such as packing GoPacks for hungry school children, pollinator packs for the environment, personal letters written to elderly, alumni and people in military service, and personal care kits for a local domestic violence shelter. There were also 10 off-campus projects.

“It was amazing seeing not just the students, faculty and staff show up, but also the community wanting to be a part of this day of service,” said Monica Jones, Associate Dean of Students and Chief Diversity Officer. “As someone who has been here just a short amount of time, this level of engagement is very encouraging to me.”

Maribeth Saleem-Tanner, Director of the Office of Civic Engagement, didn’t have an exact count of how many volunteers participated in the day, but said there were 450 chairs set up for the opening breakfast session and there were numerous people who still stood.

Dr. Katy Lustofin, Professor of Biology, coordinated the pollinator seed kit project, which began during the summer. Volunteers collated a variety of seeds to create packs that could be dispersed to create pollinator gardens. Members of the Alpha Sigma Phi spent the first part of the volunteer session creating some of the 200 seed kits at Lustofin’s station.

“Our fraternity focuses a lot on service — we have 11 of our 18 members here today,” said Trent Anthony ’22 (Marietta, Ohio). “We found this service project on the list and thought it sounded pretty cool. We normally volunteer for Marietta in Bloom. … I like being a part of the MLK Day of Service because typically you see the same students volunteering, but today there’s a good variety of groups here coming together.”

“In high school, I participated in a lot of service projects that honored Martin Luther King Jr.,” said Tyler Hackaday ’22 (Pittsburgh, Pennsylvania). He joined friends on the men’s rowing team in an assembly line in the DBRC as they created 200 care kits for EVE, Inc. and for a local food pantry. “It’s important for us to unite as a community, honor his legacy, and impact as many lives in this community as we possibly can through our service.”

“We volunteered next door at the Boys & Girls Club over fall break and so we decided to help here for MLK Day of Service,” Klicker said. “The team likes being out in the community. A lot of our rowers are Leadership students.”

“It’s a really good day for us because we get to spend time together as a team and help the community,” Guhde said. “I had no idea that food insecurity was so high here, so it makes it even more special being able to do this project.”

Jeff Waite, who runs the food pantry with his wife, Candi, and a few volunteers, said the pantry serves between 300-500 people per week and has been a staple in Marietta’s West Side since he and his wife decided to open it in 2007. A car accident, which seriously injured Candi last summer, threatened to close the pantry.

“If it wasn’t for volunteers, we would have shut down,” Waite said. “The impact would have devastated the West Side. We hear from our elderly people that without us they don’t eat. That’s why I am so grateful to the College and these great volunteers. We absolutely appreciate what the College has done for us and for our community.”