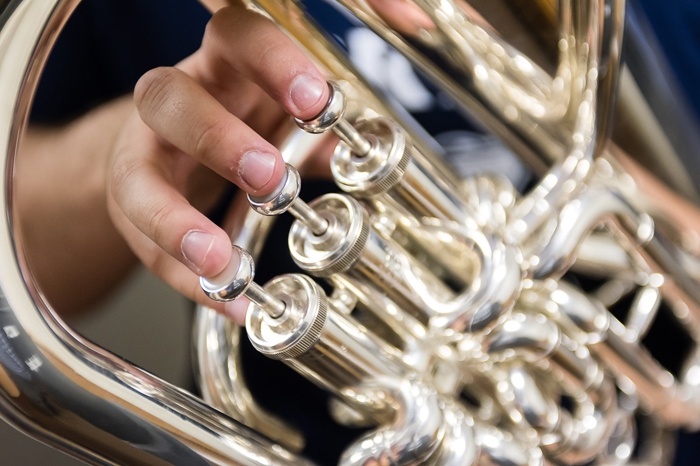 Eight Marietta College students, who are all members of the Symphonic Band, Wind Ensemble and Jazz Ensemble, have been selected to perform with the honor bands during the Ohio Private College Instrumental Conductors Association (OPCICA) Honor Band Festival Weekend from January 20-21 at The College of Wooster.

This will be the 30th annual OPCICA Honor Band Festival Weekend.

The Jazz Ensemble directors for the weekend will be the University of Findlay’s Jack Taylor, Ashland University’s Scott Garlock and Malone University’s Jeff Huston.

“OPCICA offers students a chance to immerse themselves in the art of music making with peers from other colleges, universities and conservatories from the state of Ohio,” said Marshall C. Kimball, President of OPCICA and also Associate Professor and Director of Bands and Instrumental Activities at Marietta College. “OPCICA creates an environment in which they can be musicians, giving them an opportunity to connect and create with peer artists. While academia is crucial, it’s wonderful to have a chance to apply rather than absorb. OPCICA is a rewarding and creatively stimulating event, priceless in its capacity to motivate music students to pursue excellence in their field. It is a great chance to meet other students and rehearse with several directors, all with different conducting styles.”

The Honor Concert Band and Honor Jazz Ensemble will rehearse on the College of Wooster campus all day Saturday, January 20 and Sunday morning, January 21.  Following these rehearsals, the honor band festival weekend will conclude with a concert by both the Honors Jazz Band and the Honor Concert Band at 1:30 p.m. Sunday at Wooster’s Gray Chapel. The concert is free and open to the public.

Students are nominated by their home college conductor and instrumentation is set by the festival committee in November. These students are together for two days, and in these rehearsals, their program is rehearsed and prepared for the concert. Guest conductors for the honors ensembles are chosen from the participating institutions, thereby giving students an eclectic experience with conductors of a different style, background, and technique. Each guest conductor chooses the music that is performed with the honors ensembles. Conductors from the member institutions rotate in conducting the ensembles.

The OPCICA organization also commissioned works specifically for the Honor Band Festival Weekend. The Honor Concert Band will be premiering Fanfares O.P.C.I.C.A., by composer Dr. Barry Kopetz. This composition has been commissioned in honor of the 30th anniversary of OPCICA. Kopetz is currently the Head of the Music Department at Mississippi State University and is a former member of OPCICA having been the Director of Bands at Capital University. The premiere of Fanfares O.P.C.I.C.A. will be rehearsed and conducted by Dr. Brandon Jones of Wittenberg University. Several of the past commissioned compositions have been published and are available for purchase and performance by other wind band ensembles.

OPCICA, founded in 1987, held its first collegiate honor band festival on Jan. 24, 1988, at Capital University. Festivals have been held every year since with the location rotating between the various member schools. Currently comprised of 24 member colleges and universities, the primary purpose of the organization is to develop a closer network of communication and resource sharing among the instrumental departments, divisions or conservatories of the various privately funded institutions of higher education within the state of Ohio.