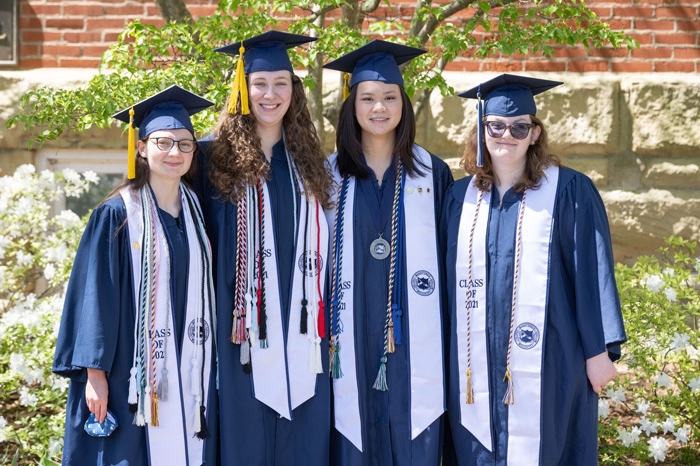 Four Marietta College seniors were inducted into the prestigious Phi Beta Kappa society, which was established in 1860 at the College, during a virtual ceremony on Monday, April 26.

Eakle, who completed her degree requirements for a Bachelor of Music in Music Therapy, will be working as an intern for the Four Seasons Hospice starting in October in Flat Rock, North Carolina. The Fort Frye High School graduate will be interning for six months.

“I am so honored to be inducted into PBK as part of the first graduating class of Music Therapy majors because it reminds me of how my liberal arts education has prepared me for my field as I help pioneer a new career path at Marietta College,” Eakle said.

Kitchen, a graduate of Marietta High School who earned a Bachelor of Arts degree in both English and Political Science, will attend William & Mary Law School in the fall.

“Being inducted into Phi Beta Kappa feels like the perfect encapsulation of my undergraduate academic career,” Kitchen said. “It is evidence of fully taking advantage of the liberal arts education offered at Marietta College, and I am truly honored to join such a prestigious society.”

McCormick, a graduate of Alfred Almond Central High School, earned a Bachelor of Arts degree in History. She will attend West Virginia University in the fall to begin work on her Master of Arts in Public History.

“Being inducted into Phi Beta Kappa is something I’ve been working toward since my first day as a Marietta College Pioneer,” McCormick said.

McNeer is a graduate of Lakota West High School and she earned a Bachelor of Science degree in Biochemistry. She also earned research honors. She will attend Case Western Reserve University starting on July 1 to begin work on her Ph.D.

“Phi Beta Kappa has given me motivation and opportunity to take full advantage of a well-rounded liberal arts education,” McNeer said. “As a science major who also had interests in the humanities, I valued the skills and knowledge gained in courses outside my major.”