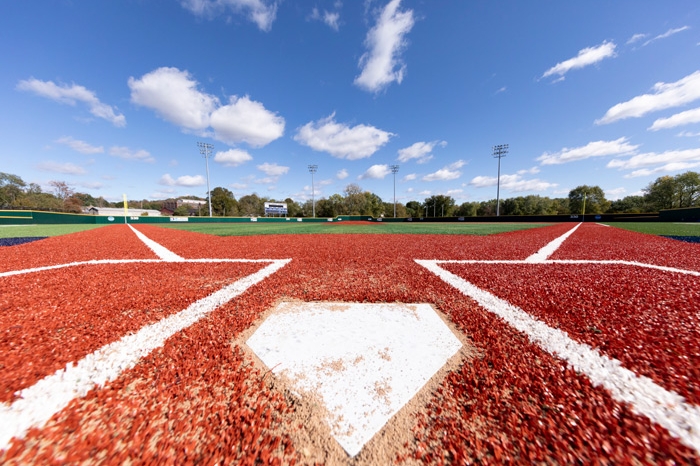 Following six months of renovations, Marietta College is excited to announce its baseball facility will now be called Don and Sue Schaly Field at Pioneer Park.

“I am confident that alumni of the program will be ecstatic to know we are reintroducing Pioneer Park into the name,” said Brian Brewer ’93, who is in his 17th season as Marietta’s baseball coach. “Many of us played for Don Schaly and he was not only the architect of this program, but also a catalyst behind creating a first-class facility. With the renovations and improvements, Pioneer Park is once again the best in Division III.”

“It was Hap who saw the wisdom in recognizing the Schalys, while also returning the stadium name back to Pioneer Park,” says Bill Ruud, Marietta College’s 19th President. “We are excited that we will get a chance to officially recognize Hap and Meg Esbenshade, the Schaly family and many others this spring at a home baseball game.”

James E. Tracy ’78, who played for Schaly before being drafted by the Chicago Cubs, initiated the project. Tracy and his wife, Debra, made a generous gift and assisted in securing input and advice on best surfaces. Other significant donors include Mrs. Schaly ’62, Life Associate Trustee Tom Carbonar '’60, Trustee James Fryfogle ’73 and his wife, Wendy Keck Fryfogle ’75, Dave Conley ’93 and Joseph Freddoso ’83.

The extensive renovations included raising portions of the field as much as three feet, the installation of a FieldTurf playing surface, an 8-foot ChampionWall, larger, step-down dugouts and a pole-less backstop with net and padding.

It was important to the donors, as well as the College, that the field is community oriented. For example, the baselines are fitted for youth baseball and softball, as well as for a portable fence for younger ages and a portable mound for softball.

The Etta Express have been dominant at home winning close to 85 percent of its games (908-167), which includes a 126-44 record in postseason games. Pioneer Park also hosted the Division III World Series from its inception in 1976 through 1987.

The facility was enhanced in 1988 with the addition of the three-story Kent Tekulve Media Building (which houses the press box, umpires' locker room, meeting room and concession stand), and elevated bleachers. The labor and equipment were donated through the Washington County Home Builders Association. The current Triple-A lighting system was added in 1994 through a lead donation from former Pioneer All-American and Major League pitcher Terry Mulholland ’85.