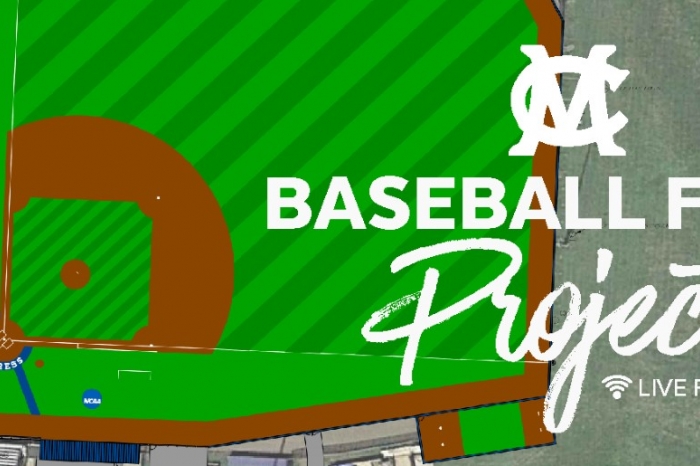 Marietta College officials are excited to announce that extensive renovations at Don Schaly Stadium, home to the Etta Express baseball team since 1968, have begun and will continue until September.

The project was made possible by a lead gift from The Spartan Foundation and Hap and Meg Esbenshade, and generous gifts from alumni and friends.

James E. Tracy '78, who played for Schaly before being drafted by the Chicago Cubs, initiated the project. Tracy and his wife, Debra, made a generous gift and assisted in securing input and advice on best surfaces. Tracy is a member of the College's Athletic Hall of Fame and is the former manager of the Los Angeles Dodgers, Pittsburgh Pirates and Colorado Rockies.

"When Don came back to Marietta College in the fall of 1963, he had a vision for the baseball program and the stadium is a significant part of that vision," said Sue Schaly. "This project will ensure that Coach (Brian) Brewer has a state-of-the-art classroom to continue the tradition of Marietta College baseball that Don started."

"The Marietta College community is absolutely thrilled by these gifts and that we are going to make these transformative upgrades at the stadium," said Marietta College President Dr. William N. Ruud. "The generosity of Hap Esbenshade and the other loyal baseball patrons are a big reason why we are going to make our baseball stadium one of the best facilities in NCAA Division III again."

The most notable addition will be the installation of a FieldTurf playing surface on the entire field, including foul territory and in the bullpens. To do this, approximately 15,000 cubic yards of dirt will be brought in to raise portions of the field as much as three feet, to minimize the risk of flooding.

The College has invested heavily in athletic facilities the past two years, including FieldTurf projects last summer at Don Drumm Stadium and Marietta Field for football, soccer and lacrosse.

Other features of the stadium renovation project include:

"This is an exciting moment for the program, and we are thankful for everyone who has supported this project and the baseball program over the years," said Brian Brewer '93, who just completed his 16th season as Marietta's baseball coach. "We are installing the FieldTurf DoublePlay system, which is designed to replicate the speed, line and bounce of a natural grass field. We wanted a system with fast outfield grass, faster infield grass and even faster infield dirt. We feel we have found the field that meets our needs."

Pioneer fans around the globe can monitor the progress of the project on the internet. A live webcam has been installed and will stream until the project is complete.

The DoublePlay system is currently being used by the Toronto Blue Jays, Texas Tech University, the University of Tennessee, Oregon State University and the University of Louisville. The field will be a two-tone green in the "grass" areas with an ash red "dirt" on the full infield and warning track. There will also be a navy blue halo around home plate and runways to each dugout.

"The enhancements that we have been able to make over the past two years have allowed Marietta College to be a leader among all NCAA Division III programs," said Larry Hiser, Director of Athletics. "The renovations at the baseball facility will not only make a major impact on the program, but it will also allow the College to host additional events for the community — more high school games, more American Legion games and also baseball tournaments. This project will let high school student-athletes know that our facility is keeping up with the tradition and history of our program."

It was important to the donors, as well as the College, that the field be community oriented. For example, the baseline will be fitted for youth baseball and softball, as well as for a portable fence for younger ages and a portable mound for softball.

Marietta has won six national championships — more than any other Division III program — after Brewer guided the Etta Express to titles in 2006, 2011 and 2012. Marietta has also produced 50 players who have gone on to play some level of professional baseball since 1965.

The Etta Express have been dominant at home winning close to 85 percent of its games (908-167), which includes a 126-44 record in postseason games. Pioneer Park also hosted the Division III World Series from its inception in 1976 through 1987.

The facility was enhanced in 1988 with the addition of the three-story Kent Tekulve Media Building (which houses the press box, umpires' locker room, meeting room and concession stand), and elevated bleachers. The labor and equipment were donated through the Washington County Home Builders Association. The current Triple-A lighting system was added in 1994 through a lead donation from former Pioneer All-American and Major League pitcher Terry Mulholland '85.

The Spartan Foundation and Hap and Meg Esbenshade have a long history of support at the College, including generous support of The Marietta Fund, Student Life and Athletics. They continue to support for the Esbenshade Series, which was established by the late Harry H. Esbenshade Jr.