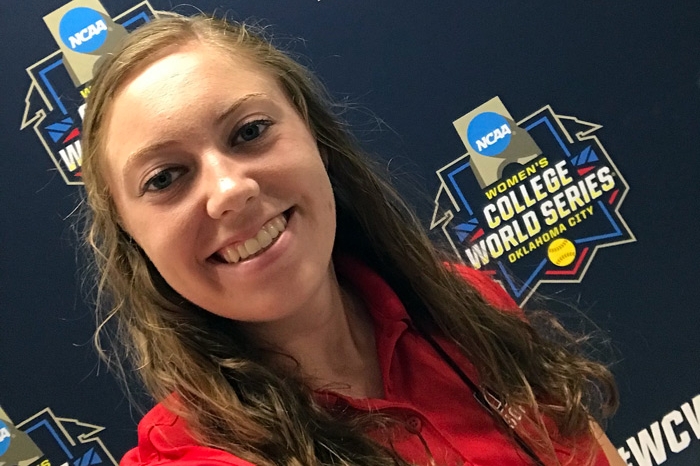 With cannons spraying blue and white confetti onto the infield at USA Softball Hall of Fame Stadium in Oklahoma City, Marietta College’s Micaela Bradley ’23 (Greenup, Illinois) was in the middle of the action at the Women’s College World Series.

“At the championship game, one of my responsibilities was to make sure no one could get on the field after the final game,” said Bradley, following Oklahoma’s 10-5 victory over Texas. “I was one of the first people on the field, and it was exciting to be part of this championship — even if it was behind the scenes.”

Bradley, who is majoring in Sport Management, is interning with USA Softball this summer and the experience she is gaining has been life-changing.

On the first day of the World Series, Bradley’s day began at 6:00 a.m. and she was still going strong at 11:00 p.m. as she helped clean up the stadium. Also helping with the clean-up was Jennie Finch, a former All-American pitcher at Arizona who won a championship in 2001.

“It was great meeting Jennie Finch. Here is the former Olympic athlete and star softball player, who was there for the tournament and after the games were done for the day, she helped us pick up trash,” Bradley said. “It’s not as glamorous when you are working at the event. You aren’t here as a fan.”

Bradley also learned that everything didn’t go as planned either.

“Professor (Rick) Smith has told us in class that the event staff have to fix problems throughout the event, and our job is to make sure that the fans and the athletes don’t see it,” Bradley said. “There were a few times I was in the middle of doing my job and I was pulled away to help fix a problem. I believe we solved each problem without anyone realizing there was an issue.”

By the time Oklahoma All-American Jocelyn Alo was receiving her Most Valuable Player Award, Bradley and the other interns were realizing they had completed 16 games in seven days with more than 12,000 fans attending each game.

“This experience has definitely shown me all the different roles people play,” Bradley said. “We had record-breaking attendance at every session. It’s crazy to be part of the atmosphere here. … I felt very well prepared because of my experiences at Marietta. We talk in class that you are going to have to wear a lot of hats, and that’s exactly what I have been doing.”

Smith said 22 Marietta Sport Management students are interning this summer, and each one is having a unique experience. He remains in regular contact with each of them to make sure everything is going well, but also to answer any questions they may have.

“Micaela had a dream, and she went for it. I’m glad she earned the internship with USA softball,” said Smith, Associate Professor of Sport Management. “Micaela is an outstanding student. She is taking advantage of everything Marietta College has afforded her the opportunity to be a student-athlete, have a dual discipline in Sport Management and Leadership, attend the Boca Raton Bowl to work at a college football postseason game, and now do such an exclusive internship with USA Softball.”

Bradley is now preparing for the 2022 Junior Olympic Cup, which features some of the best players in 16-and-under and 18-and-under.

“We get a break before the next tournament, so that helps us get ready,” she said. “I’ll be doing more office work than I did before the World Series. We are planning for a check-in event and a party for the players. We are really looking forward to that opportunity.”

Bradley is a middle infielder on Marietta’s softball team, and she has a passion for the sport. In Smith’s Sport Event and Facility Management course, students write an event operation manual.