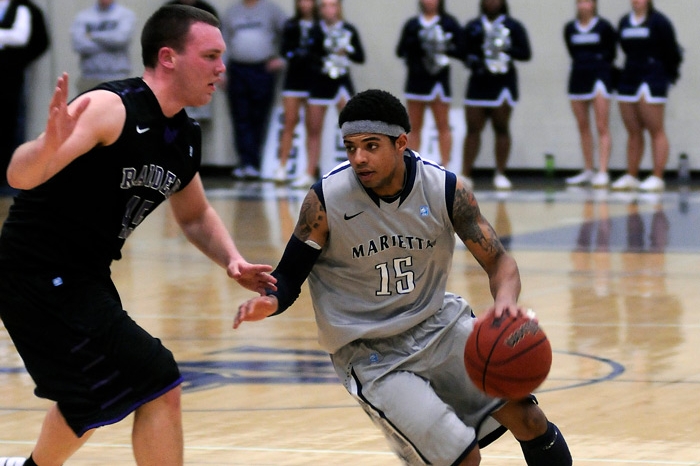 Not all NBA dreams are alike.

Of course, Tyler Hammond ’14 dreamed of playing in the NBA, but he realized that wasn’t going to come to fruition years ago. But he never stopped believing he could have a career in professional basketball.

“Last fall, I tweeted that I’m going to make it in the NBA and maybe not as a player,” he said. “It has always been a dream to work in the NBA. I got here and I’m going to keep working hard.”

Hammond, a standout on Marietta College’s basketball team, recently joined the NBA’s Memphis Grizzlies as a Youth Basketball Coordinator. He started in March, just as the COVID-19 pandemic was starting to shut down businesses across the U.S.

“The only time I have been in my office was to pick up some Grizzlies’ gear and my laptop,” he said. “Everything was still open in Memphis when I left Michigan to move, but soon after I got here I got a call from my supervisor and he told me they were shutting everything down.”

Each team in the NBA has ambassadors like Hammond who share videos, conduct camps and run programs during halftime of games as part of Jr. NBA, which is the premier resource for youth basketball players, parents, coaches and league administrators looking to learn more about the game.

After four seasons as an assistant coach at Siena Heights University in Adrian, Michigan, and running Hamm Hoops — which helps youngsters improve their basketball skills and increase their knowledge of the game.

“I feel like I had a leg up because I have been hosting training videos for the past five years with Hamm Hoops,” Hammond said. “My supervisor liked that I started Hamm Hoops and he wanted to know how I was able to do it in a smaller community. I did it because I love basketball, and I also wanted to give the kids something to do that would help them stay out of trouble.”

Despite being stuck at home during the COVID-19 pandemic, Hammond has been creating skills videos to help children who are also stuck at home.

“It’s not exactly what I thought I’d be doing, but I’m making the best of it,” Hammond said. “My goal is to get the fan base involved.”

Hammond made an impression on Marietta College men’s basketball coach Jon VanderWal almost immediately. As a freshman, Hammond added stability at point guard and he helped guide the Pioneers to a 27-4 record, an Ohio Athletic Conference championship and a spot in the Sweet 16 of the NCAA Division III Tournament.

Hammond earned a reputation of being a go-to guy when the Pioneers needed to make a big shot. His biggest shot was probably a floating jumper to give Marietta a 63-62 win over Wittenberg in the NCAA Tournament.

VanderWal said Hammond had an “it” factor, but he also worked extremely hard when no one was paying attention.

“I’m really excited for Tyler and proud of him. He has worked extremely hard and deserves this opportunity with the Memphis Grizzlies,” VanderWal said. “Tyler will do an amazing job as their youth basketball/camp coordinator. His energy, passion, experience, personality and knowledge of the game make him the perfect person for this position.”