Championship rings were inevitable for the 2017-18 Pioneers | Marietta College

Championship rings were inevitable for the 2017-18 Pioneers 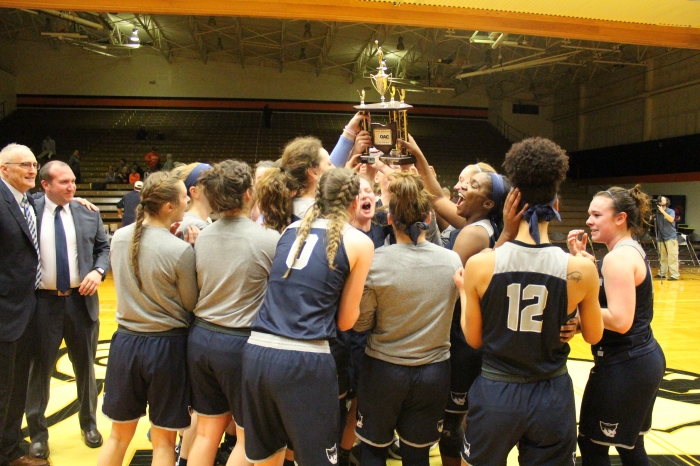 Her message? One day they would have championship rings to put in them.

“We’ve been talking about filling those boxes ever since,” Lett said.

It’s time to place the order.

Marietta earned its first OAC Tournament Championship Saturday with a big 85-68 victory over top-seeded Ohio Northern on the road in Ada. The win came exactly one week after Marietta fell to the 24th-ranked Polar Bears (23-5) 93-85 in double overtime of the regular-season finale.

“It was definitely worth the wait,” said Marietta coach Kole Vivian.

With the win, the Pioneers (24-4) have earned the OAC’s automatic spot into the NCAA Division III Tournament that begins next week.

Lett was named MVP of the three-game OAC Tournament after she scored 21 points Saturday. She also scored 23 against John Carroll and 10 against Capital in wins earlier in the week. Senior Amisha Herd, who was named to the All-Tournament Team, had 17 points to go with 12 rebounds and six assists. Senior Brooke Borich led Marietta’s scorers with 23 points.

“(Brooke) was so good today, especially in the second half,” Vivian said. “She was getting to the rim and getting to the foul line. When we recruited Brooke, she was a player that we thought could take us to that next level. For her to be the leading scorer against Northern seems fitting.”

Borich said she was still trying to grasp that Marietta is now an OAC champion.

“I keep thinking about how hard we’ve worked to get to this point,” she said. “We knew we could do this, and to finally get this championship for Marietta and the program is something we are all proud we accomplished today.”

ONU had a vocal student section and a nice home crowd, but Marietta's players said the Marietta fans who made the drive to Ohio Northern helped pump them up for the game.

“It was amazing,” Lett said. "It started (Friday) when we had our foster family giving us a farewell to the bus. And then for so many people to travel three hours to come watch us play, well, it was amazing to have the support.”

Marietta will learn who it plays and where it plays in the first round of the NCAA Tournament at 2:30 p.m. Monday during the selection show.

“We’re going to enjoy this, but we’re also excited that we get to keep playing in the NCAAs,” Herd said.