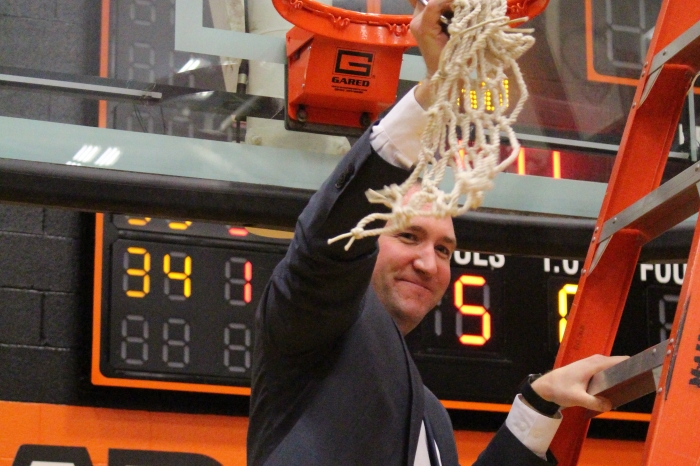 Sometimes making history takes a week longer than you expected.

After letting its first Ohio Athletic Conference regular season championship slip through its fingers a week ago, Marietta College's women's basketball team wasn't about to let another opportunity go by the wayside.

Thanks to lopsided scores in the first and fourth quarters, the Pioneers cruised to an 85-68 victory over top-seeded Ohio Northern in the women’s OAC Tournament Championship game in Ada Saturday afternoon. The win came exactly one week after Marietta fell to the 24th-ranked Polar Bears (23-5) 93-85 in double overtime of the regular-season finale.

Marietta (24-4) earns the conference’s automatic bid into the NCAA Division III Tournament that starts next week.

“We’ve been working for this moment since I arrived,” said senior Amisha Herd. “Everybody wants to be a champion at some point in their career, and now everybody on this team is a champ. To do it with this team is just awesome. It’s a huge step for women’s basketball at Marietta. To be able to say we are OAC champs is the best feeling.”

Herd, who was named to the All-Tournament Team, had a monster championship game. In 38 minutes, she scored 17 points to go with 12 rebounds and six assists. Even more impressive was she committed only one turnover.

“Amisha is the best leader that I have ever coached,” said Marietta coach Kole Vivian. “She wanted that win so bad last week, but she never complained and came back to work in practice. She’s been talking about this for four years, and I'm so proud of her and this accomplishment."

“We led at halftime, but we didn’t want to stay content with that,” said Borich, who scored 18 points in the second half. “At halftime, we talked about it was going to be a game of runs and whenever they go on a run that we have to stay together. We did a really good job with that and never let it get out-of-hand when they made a run.”

Lett, who was named the OAC Tournament MVP, had the hot hand in the first half as she scored 17 points to stake the Pioneers to a 40-34 lead.

“Looking at our past games at ONU, I have never had a good game until today,” she said. “I came in with the mindset that I was just going to play my game and not think about it. My first shot was effortless, and it kind of came to me. I’m glad I could do that for my team.”

Marietta’s senior class had never defeated the Polar Bears before, but Vivian said his squad was confident they could do it Saturday.

The Pioneers jumped out to a 22-11 lead in the first quarter, but Northern rebounded in the middle quarters and outscored Marietta 44-34. The Polar Bears appeared to have the momentum with 35 seconds to play in the third quarter when the Pioneers unexpectedly scored five quick points and led 56-55 going into the final quarter.

“The major turning point was at the end of the third quarter,” Herd said. “Instead of being down going into the fourth, we ended up being up by one. I kind of knew then that we were not going to lose the game in the fourth quarter. The fourth quarter we went on a run and didn’t look back.”

It was Herd’s steal and layup that tied the game at 55, but she was fouled on the play and added a free throw to give the Pioneers the lead. Just before the steal, Lett drilled a three.

With 7:12 to play, Marietta took a 61-59 lead on two Herd foul shots, and the Pioneers never trailed again. From that point, Marietta outscored the Polar Bears 24-9.

"When we went up to Ohio Northern last year in the OAC semifinal game and lost by one — and had a chance to win — we started to believe we could do this," Vivian said. "Our team worked their tails off, and once they started to believe they could do this, they had to figure out they could do it. Last week, we thought we had them, but I’ll take this one every time because we earned the automatic bid.”

Marietta capitalized on Ohio Northern’s 15 turnovers as the Pioneers scored 31 points. Amy Bullimore led Ohio Northern with 24 points and nine rebounds as the Polar Bears will now have to wait and see if they earn an at-large bid into the NCAA Tournament.

Marietta will learn who it plays and where it plays in the first round of the NCAA Tournament at 2:30 p.m. Monday during the selection show.