Nothing compares to the power of The Long Blue Line

Arnold “Arnie” Sutter ’70 was fresh out of college and looking for his dream job.

Having studied History and Geography at Marietta College under the likes of Dr. Bill Hartel and Dr. Robert Deets, and played varsity basketball for Coach Don Kelley, Sutter knew two things: he wanted to teach and he wanted to coach. As a newly minted teacher, he needed to find a way to get his foot in the door just to have a chance to work toward his career goals.

Help came from an unlikely source when he applied for a position teaching in the Cincinnati Public Schools District.

“If it weren’t for an MC graduate, I wouldn’t have gotten my job as a teacher,” he says. “He was on the Board of Education for Cincinnati Public Schools and he personally recommended me for the job because I graduated from Marietta and because he saw me play basketball.”

That alumnus was the late Edward G. Harness ’40, then-president of Proctor & Gamble Co.

For most institutions, that might seem like a once-in-a-lifetime occurrence. But for Marietta College, stories like Sutter’s are just one part of being a member of The Long Blue Line.

Belonging to the Marietta College community means that current students have opportunities to connect with professional mentors who once also called Marietta their second home; it means young alumni who need to develop connections in their fields have an established core of supporters waiting in the wings to help; it means alumni from different generations can come together to share their memories of college life and feel an instant connection with Pioneers they have just met.

Sutter’s inspiration for becoming a teacher came from two talented but polar-opposite professors: Hartel and Deets.

“They kind of went at each other,” Sutter says. “One was like our father — really strict — and the other was like our favorite uncle. I couldn’t have been any luckier to have both of them. They were my confidants.”

Sutter was able to fulfill his goals — through the training of talented professors and the support of a successful fellow alumnus — of teaching history in Cincinnati and suburban Toledo and coaching basketball and football.

“And when I thought it was the right fit, I recommended a few of my students to go to Marietta … A small, liberal arts college like Marietta is the way to go.” 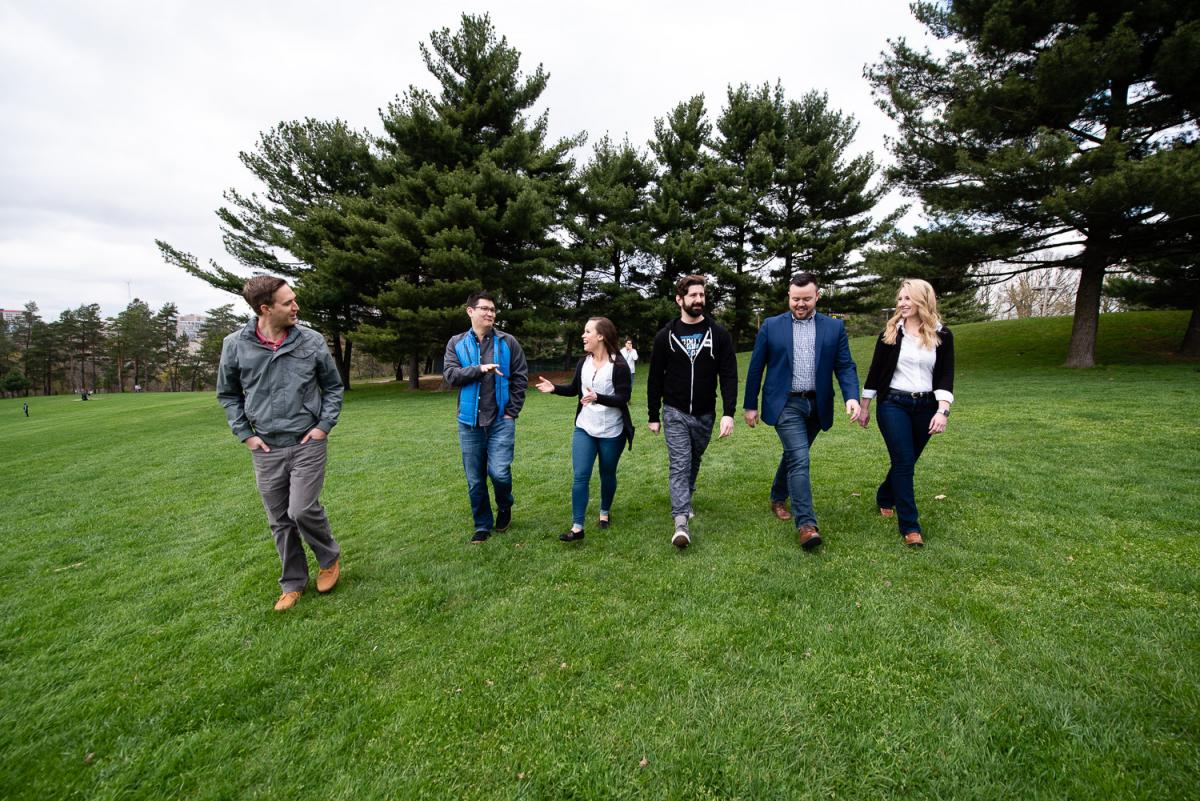 “After my interview with [Assistant Professor and Department Chair] Lori Smith and [Provost] Janet Bland, I said, ‘Lori, not that it matters, but I’m curious about which office I’ll be in next year.’ She said, ‘Mills 105, is that OK?’ And I said, ‘Lori, that’s great. That’s the office I decided to be a Communication major in many years ago after a long conversation with Alane Sanders.’ ” — Cody M. Clemens ’13 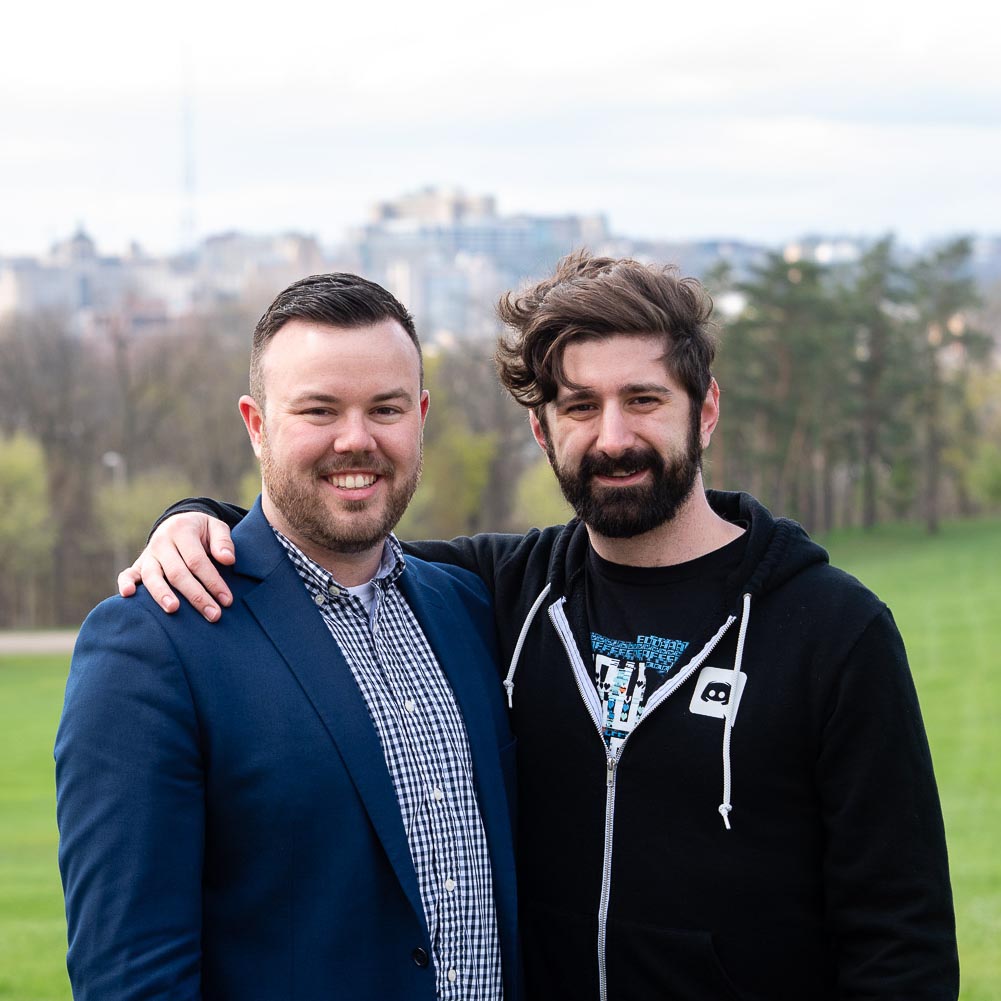 The Long Blue Line is not a single string that connects alumni to other alumni; it’s a tether made from and strengthened by countless strands — current students, generations of alumni, professors, staff members, administrations and boards, monumental successes and shared heartache.

This fall, Cody M. Clemens ’13 will return to the place where his career started: Mills 105.

“After my interview with [Assistant Professor and Department Chair] Lori Smith and [Provost] Janet Bland, I said, ‘Lori, not that it matters, but I’m curious about which office I’ll be in next year.’ She said, ‘Mills 105, is that OK?’ And I said, ‘Lori, that’s great. That’s the office I decided to be a Communication major in many years ago after a long conversation with Alane Sanders.’ ” — Cody M. Clemens ’13

The first-generation college student came to Marietta to study Biology and prepare to become a physician assistant. After a heart-to-heart with his advisor, Dr. Steve Spilatro, who expressed concern that Clemens may not be passionate about the path he was on, he began soul-searching. “I was lost and I didn’t know what to do,” he says. “And I was walking through Mills Hall and Dr. Alane Sanders’ door was open. I had just had her the semester prior for COMM 101, and I said, ‘Hey, Dr. Sanders, do you have a minute to talk?’ and she said, ‘Yes, absolutely; come in.’ ”

An hour and a half later, Clemens and Sanders wrapped up their impromptu meeting in her office — Mills 105 — with a new focus: Organizational Communication and Public Relations. “From the moment I switched, it was magical,” he says. “I was excelling because I was doing things that I enjoyed.”

During the summer before his senior year, Clemens landed an internship with Target in Pittsburgh, but he needed a place to live to make that happen. He knew exactly where to look.

When he was hired by Target right after graduation, his friends happened to be moving to an apartment two doors down from their old one, so they reached out to Clemens to ask if he wanted it. Clemens was thankful for the offer and he moved into their old apartment with his friend and new roommate, Brandi Gillian Lantz ’13.

Inks ’12, Ensinger ’11 and other friends living in Pittsburgh, Kyle Thauvette ’10 and Jessica “Lippy” Lipniskas ’11, introduced Clemens to the city — and to life as a college graduate. They were also supportive when Clemens began graduate school at Duquesne University and working as a graduate research assistant. Since then, he has continued his education at Bowling Green State University. He will complete his doctorate in communication in the spring of 2019.

In the meantime, Clemens will return to a familiar place — this time, as a mentor. He will serve as a Visiting Assistant Professor in the Communication Department this fall.

“After my interview with [Assistant Professor and Department Chair] Lori Smith and [Provost] Janet Bland, I said, ‘Lori, not that it matters, but I’m curious about which office I’ll be in next year.’ She said, ‘Mills 105, is that OK?’ And I said, ‘Lori, that’s great. That’s the office I decided to be a Communication major in many years ago after a long conversation with Alane Sanders.’ ”

Like Clemens, Cynthia Allen ’67 has maintained a strong connection with her Alpha Xi Delta sisters since earning a Bachelor of Science in Organic Chemistry from Marietta. She and seven of her sisters meet about every five years.

“We live all over the country, so we use our geographical difference to show each other where we live,” she says. “Each time we get together, we catch up and find that we still have a huge amount in common.”

From the moment she was recruited from her high school in Baltimore, Maryland, she knew Marietta would be a great fit.

“There was lots to offer — so many experiences that are still vivid in my memory,” she says. “There was a person in the area who had Arabian horses and the school offered that we could take lessons … we would learn how to saddle up, put their bridles on and ride. My experiences at Marietta were vast. As much as I was a scientist, because of the great education, I wasn’t holed up in a lab, but was able to have adventures and advantages such as taking (Chic) Peterson’s art class, working in the radio station as an engineer and being exposed to rowing for the first time.”

In 1967, while she was still a student, men’s rowing won Dad Vail. She attended the reunion last year and also watched the races this spring.

“I met a young man named Max, who was rowing for Marietta,” she says. “He is a Biochemistry major, so we had a lot to talk about. I encouraged him to stay at the school because of all the opportunities Marietta College provides like rowing and getting a great education.”

All alumni have experienced poignant moments during their years on campus that seem to be definitive markers in their lifetimes. For Allen, it happened shortly after she arrived.

“In my freshman year in the fall, we all experienced the assassination of President John F. Kennedy,” Allen says. “A bunch of us were huddling under our umbrellas in the rain in front of Dawes Memorial Library.”

Listening to their radios in their freshman dorm, she and classmates felt compelled to go outside to seek companionship and solace.

“It was raining,” she says. “We would just talk randomly, and then I remember hearing the rain on our umbrellas and just staring, having no words.” 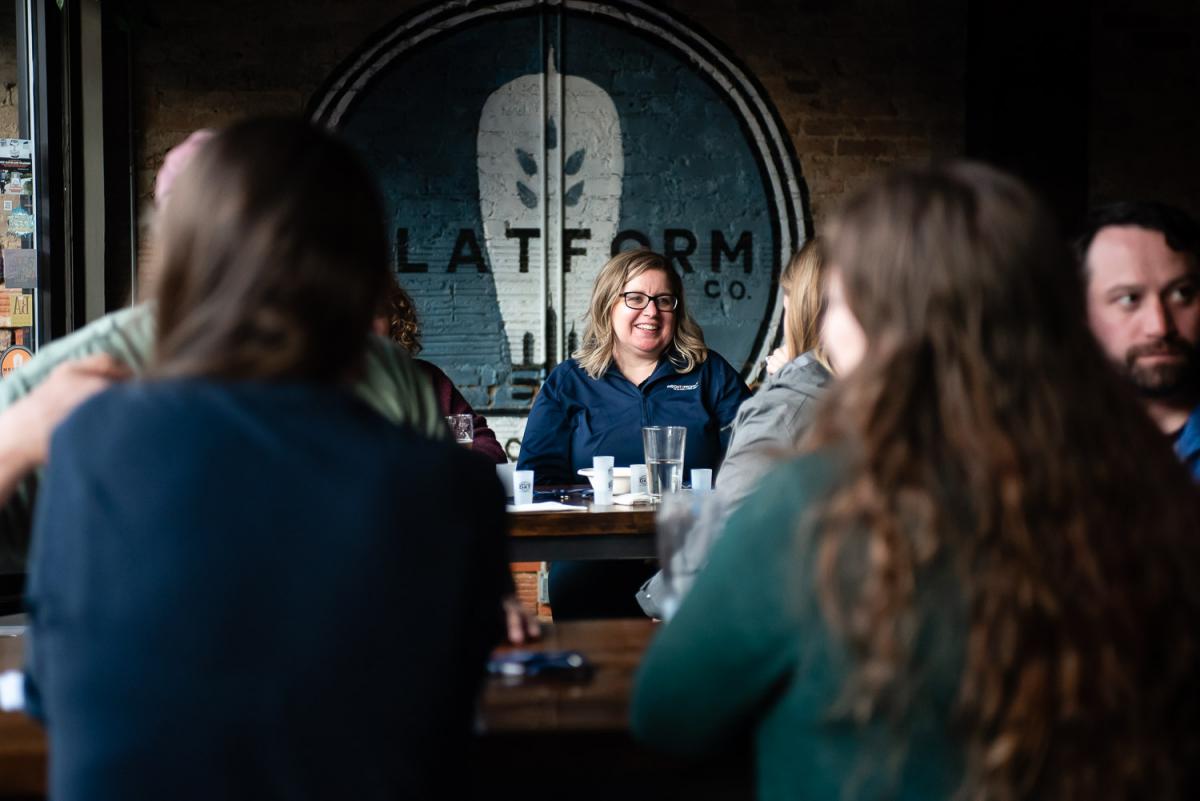 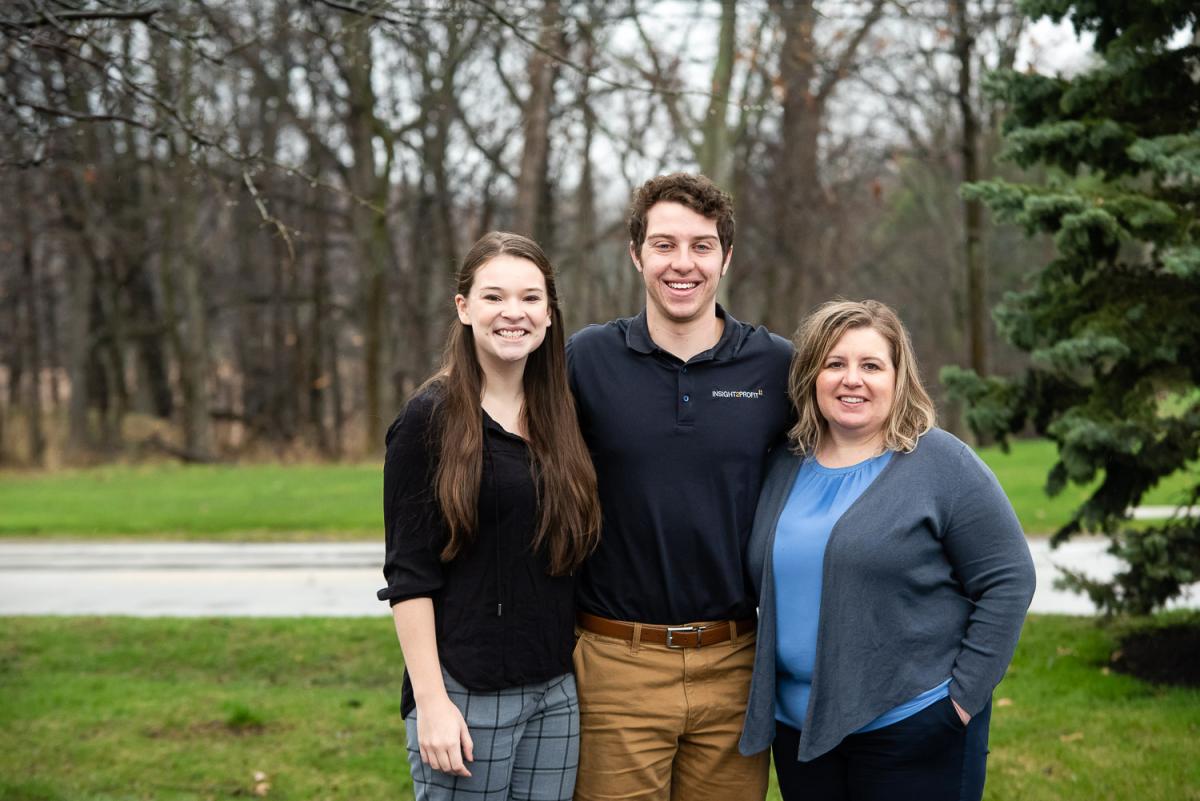 “In our firm, having great talent is critical. We need people with outstanding analytical and critical thinking skills, and also great communication and leadership skills. I know they got that in their Marietta College education.” — Danielle Cisler ’05 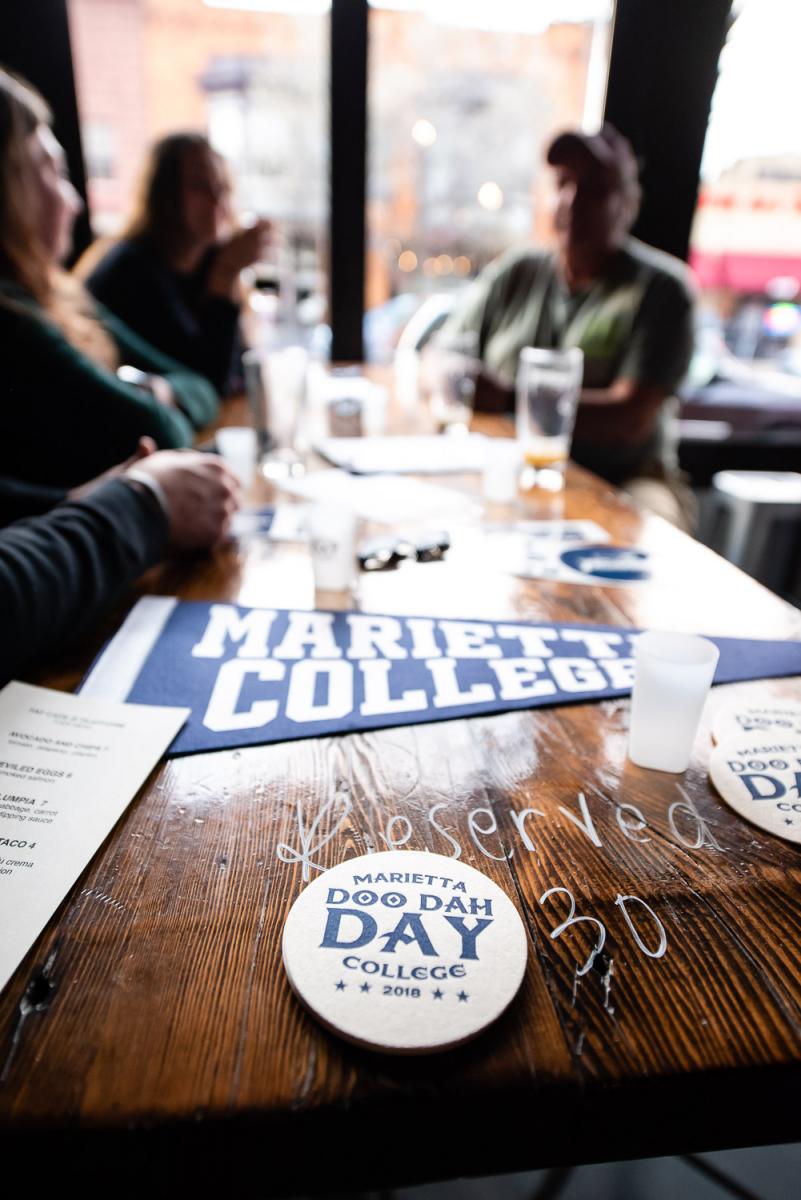 This spring, Regional Associations across the country planned their own version of Doo Dah Day, with a little help from Marietta’s Alumni Engagement Office and the support of the Alumni Association Board. From Baltimore, Maryland, to Seattle, Washington, small groups of Long Blue Liners gathered to celebrate all things Marietta.

Among Cleveland’s attendees was Danielle Cisler ’05, who has been an active supporter of Marietta’s up-and-coming professionals.

As a Director of Consulting for INSIGHT2PROFIT, a company that combines technology and expertise to deliver sustainable growth to companies through implementation and management of pricing and profit strategies, she has recruited Marietta students for the company’s internship program. Though INSIGHT2PROFIT is a mid-sized consulting firm, it boasts three Marietta College graduates among its employees— Cisler, a full-time team member whom Cisler recruited to the internship program, and one graduate who was hired as a business analyst.

“In our firm, having great talent is critical,” Cisler says. “We need people with outstanding analytical and critical thinking skills, and also great communication and leadership skills. I know they got that in their Marietta College education.”

Cisler came to Marietta as a Psychology and Mathematics double major, but her time at the College could have justifiably ended as quickly as it started. During her freshman year, she lost her mother unexpectedly, as well as a very close friend.

The Math Department rallied around her to support her through her grief.

“I came back and buried myself into school,” she says. “... For me, Marietta College gave me a place to feel at home.”

In 2012, Cisler lost her father, and once again, her Marietta mentors were there for support.

“When my father passed away, the entire Math Department came to his funeral,” she says. “Dr. (Mark) Miller, (Lauren) Brubaker, Tynan, (Matt) Menzel — they were there … I can’t tell you how much it meant to me.”

Cisler was working for Simonton Windows when she connected with Hilles Hughes, Marietta’s Director of the Career Center. She began attending networking events for undergraduate students and being a guest speaker and mentor to students in Marketing classes.

“I really look for any opportunity to give back by helping people open the doors to career opportunities,” she says.

Cynthia Palmer Szafraniec ’80 shares Cisler’s notion of helping build strong communities through support. She chose Marietta because a recruiter visited her high school and also stopped by her house. She and her family believed Marietta would be a great experience, and her expectations were met.

In addition to meeting her husband, Roland, at Marietta, both of her sons, Ryan ’06 and Andrew ’08, and her daughter-in-law, Loren Genson ’06, all graduated from Marietta.

As an alumna, the Sociology and Psychology major continued to champion the value of a Marietta College education. She volunteered through the Alumni Association to serve as an alumna ambassador during high school college fairs.

She also enjoys the variety of alumni events available to members of The Long Blue Line across the country.

“I attend all of the Marietta College events that my schedule allows,” she says. “I had friends attend the Doo Dah Day event in Portland, Maine. (Alumni events) are opportunities to connect with people. It’s a fun way to meet people from other times and it’s also a pleasure to connect with current students.”

And the Marietta College tradition continues — that line always adding a new strand to strengthen the truss. 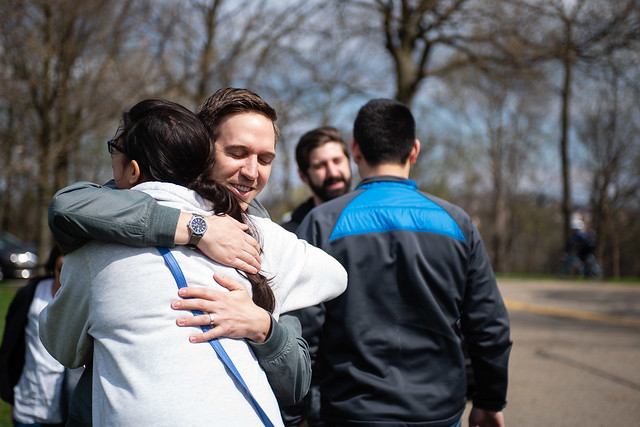 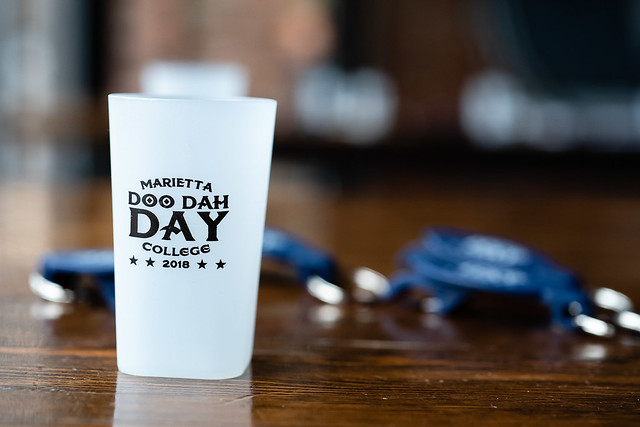