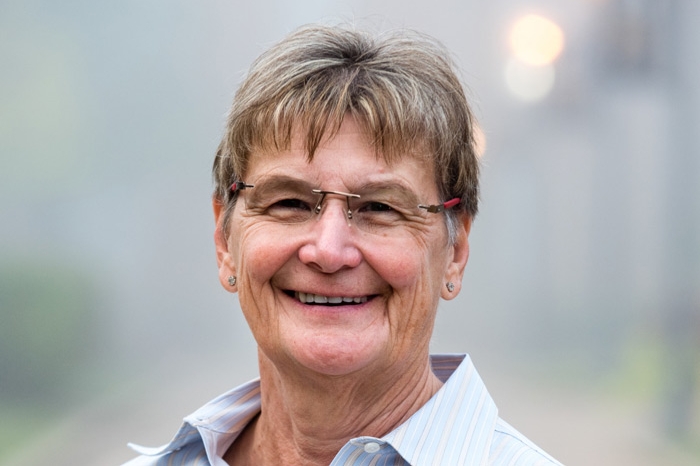 Barbara Perry Fitzgerald ’73 has had many roles at Marietta College since stepping onto campus as a freshman in 1969.

On Sunday, May 5th, after completing her 14th and final year as a member of Marietta’s Board of Trustees, she will add to that list: the 2019 Commencement Keynote Speaker.

“Barbara Fitzgerald has been a loyal and dedicated supporter of Marietta College for decades, and we are excited that she will have this opportunity to share some stories and wisdom with our graduates,” said Dr. William N. Ruud, Marietta College’s 19th President. “She enjoyed a successful and amazing career that had a strong focus on customer service for companies like PetSmart, Sears, Toys “R” Us and Harmon Auto Glass. Everyone who attends the Commencement ceremony will enjoy hearing her message.”

Fitzgerald was genuinely surprised she was asked to be this year’s Commencement speaker.

“I am honored and humbled at being given the opportunity to share my thoughts with the graduates,” she said. “I thought signing the diplomas, as Board chair, was awesome, but this is an even higher honor."

Fitzgerald became a College Trustee in 2005 and served as the Board Chair for four years (2011-15). She said it was an honor to play a role in the College’s fundraising efforts and help lead an institution that gave her so much as a student.

“I am a first-generation college graduate and somehow feel this helps to recognize the sacrifices my parents made to make my college experience possible,” Fitzgerald said. “Had I made a different choice in which college to attend, I am pretty sure I would not have been given the chance to be a trustee or a commencement speaker. Marietta holds its students close and its graduates even closer, giving them the ability to stay engaged and celebrating their accomplishments.”

Dr. Janet Bland, Provost and Dean of the Faculty, first met Fitzgerald in 2007 when she was serving as the Executive-in-Residence (EIR), and she sat in on Bland’s Literature class, Concepts of Gender. Over time, the two have developed a strong, professional connection and have become close friends.

“Barbara’s years of service to Marietta College have been invaluable to the entire campus, but the folks in our division have particularly benefited from her devotion to academic excellence,” Bland said. “Her voice has been crucial to any discussion on the Academic Activities Trustee Committee. She has been a great advocate for faculty and academic staff, always the first to recognize the hard work of our employees as they support our students’ learning.”

The EIR program now bears her name after Fitzgerald, along with her husband Paul, made an initial $100,000 donation to fund the Fitzgerald Executive-in-Residence as well as the Schwartz Leader-in-Residence through the McDonough Center for Leadership and Business.

“What I remember about my time at Marietta isn’t very unusual — the ability to know your professors personally, outside of the classroom, and to realize everyone at the College truly cared about you as an individual,” Fitzgerald said. “And, of course, the friends you make and keep. Having just attended a Homecoming with a number of my sorority sisters, it was if we were just on campus, despite not being together for a long time. What we share is a bond that exists despite time apart.”

She left Sears in 1997 and joined Toys “R” Us as VP/GM for New York and New Jersey, the company’s largest market with annual sales of $1 billion. She was promoted to Vice President of People Development and led the company-wide initiative (This Magic Moment), designed to transform Toys “R” Us into a customer-focused organization.

In early 2000, Barbara was named President of Harmon AutoGlass, then the nation’s second-largest installer of replacement windshields. She joined PetSmart at the end of that year as Senior Vice President of Store Operations where she led the strategic focus on customer service, launching a company-wide service initiative: PetSmart Unleashed. She retired from PetSmart in June 2007. She also serves on the board for both the Arizona Golf Association and Arizona Women’s Golf Association. She is a former member of the board of The Be Kind People Project in Arizona and a past member of the PetSmart Charities and The Schwan Food Company Boards.

“She consistently reminds people, in almost every campus discussion I have shared with her, the purpose of Marietta College is to transform students,” Bland said. “Her support has gone a long way in helping us to deliver that primary educational mission to our current Pioneers as they are here on campus learning and then as they join The Long Blue Line out into the world.”

Fitzgerald plans to share her thoughts on her life and career after college — “How you never know what roads you might travel but need to embrace the opportunities that present themselves,” she said. “And, of course, there will be a few stories about work and travel experiences. Especially the travel.”

Fitzgerald will also be recognized during Commencement with an honorary degree in Doctor of Humane Letters.

“She embodies the intellectual skill set we wish to equip every graduating senior with critical thinking, creative problem-solving, a positive entrepreneurial mindset, and an inherent hope for the future,” Bland said. “Barbara has served as a mentor for me and become a valued friend. I am so pleased she will be receiving this degree and speaking at graduation. Well deserved.”