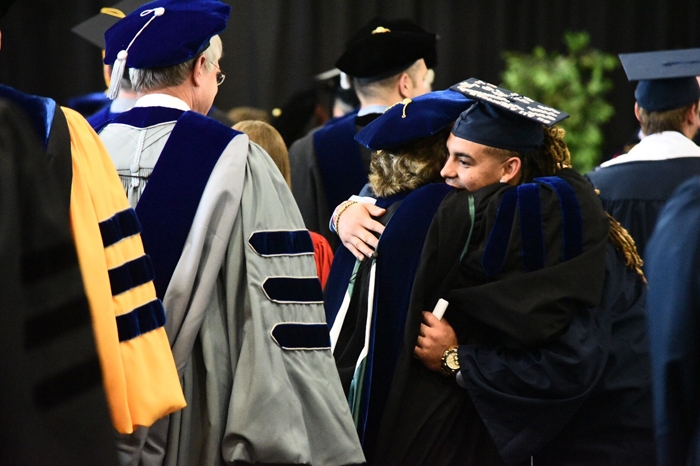 Ritter, along with his wife Leslie Straub Ritter ’85, presented each of the nearly 250 graduates with seven books that he asked each of them to read. The books were Strength Finders by Gallup Corp., Think and Grow Rich by Napoleon Hill, The Law of Attraction by Jack Canfield, The One Thing by Gary Kellar, The 10X Rule by Grant Gardone, Great at Work by Morten Hansen and Shackleton’s Way by Margot Morrel.

“I hope you will invest the time to read through these books and acquire the knowledge, wisdom, and habits they expound,” Ritter said. “I have a challenge for all of you today. I have invested about $100 in each one of you. In 10 years I would like to see a 10-times return for Marietta. So I lay out the challenge for each of you to donate $1,000 over the next 10 years — this would equal a class gift of $250,000 to Marietta, the largest class gift ever made at graduation of any class. This is not hard to do, because if you have read these books, practiced their teachings, then you all will be very wealthy within 10 years and will easily afford to give Marietta $1,000 or even more. Or look at it this way – it is 28 cents a day.”

The Ritters were each given an honorary Doctorate of Humane Letters by President Bill Ruud and Provost Janet Bland. Ruud and Bland also had an unexpected honor to bestow on the Ritters — the first two Bachelor of Arts degrees in Music Therapy. The Ritters helped establish the program with an initial $1 million gift in December 2016.

“Don and Leslie continue to amaze me with their generosity and passion for their alma mater,” Ruud said. “I was excited to hear what Don would say to our graduates today, and then their gift to the Class of 2018 is an impressive statement about their investment in Marietta College and our students.”

The College’s 181st Commencement was about the graduates, though, who are heading off for jobs around the world, graduate programs at Marietta and other colleges and universities and some students are still deciding their next steps.

“The real wisdom to pass on here today is that you’re sitting next to your potential partners in business, future mates or lifelong friends,” Ritter said. “So take a minute to look around and see it for yourself. These are the most important relationships you will ever have. Cherish them. Grow them. Challenge them.”

Marietta College welcomed approximately 250 graduates into The Long Blue Line as President Ruud and Provost Janet Bland handed out diplomas in front of more than 1,500 family and friends in the Dyson Baudo Recreation Center. It was also the first year that graduates wore navy blue robes.

"We felt it was important to start The Long Blue Line today," Ruud said.

The Jewett Orations, which remain a traditional part of Marietta’s Commencement, was won by Baffour P. Nkrumah-Ababio (Marietta, Ohio) with “Our Kente Experiences.”

“Class of 2018, as new paths open ahead of today, let us walk as PIONEERS with purpose, because we have an obligation to those who come after us,” Nkrumah-Ababio said. “Our education will be meaningless unless it radiates into the improvement in the quality of life of all around us. Armed with a liberal arts degree, we understand that this world cannot afford for us to live in a vacuum.”

The Class of 2018 honored one faculty member — Dr. Tanya Judd Pucella, McCoy Associate Professor, as she was presented the Outstanding Faculty Award.