One year later, Marietta’s Class of 2020 graduates in-person in DBRC 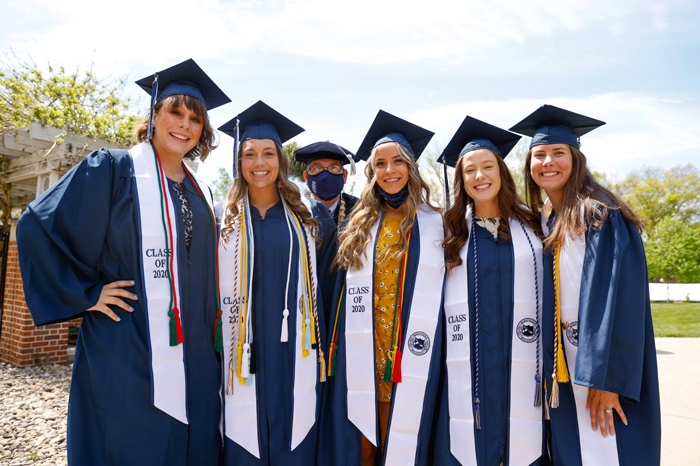 It was more intimate than a typical Marietta College Commencement ceremony, but for the nearly 50 graduates and their families who returned to campus on Sunday, May 2, appearing in-person to graduate was exactly what they needed — and wanted.

“It feels like a reunion seeing everybody, but seeing everybody in the robes makes it more formal,” said Alexandra Kirsch (Pittsburgh, Pennsylvania). “But I haven’t seen everyone in a year, so it feels good to get back together.”

Amanda Carpenter Farish (Zanesville, Ohio) added, “It feels good to be back and see friends. We’re all excited to be here.”

On May 3, 2020, the College conducted a virtual Commencement and welcomed approximately 175 graduates into The Long Blue Line. On that day, President Bill Ruud promised the graduates that when the time was right, the College would welcome them back for a “Commencement ceremony you have earned and deserve.”

“I really only thought we would have our virtual commencement, and I’d have to be OK with only having a virtual commencement,” she said. “But once the emails started coming, I was kind of in denial at first and I didn’t believe it would feel as normal as it actually feels. It feels like you’re just catching up with these people who you spent a lot of your life with.”

While there were only about 50 graduates attending Sunday’s graduation, there are approximately 175 members of the Class of 2020 that President Ruud and Provost Janet Bland welcomed into The Long Blue Line in front of approximately 300 family and friends at the Dyson Baudo Recreation Center. The College limited the number of people who could attend the ceremony due to COVID-19 restrictions.

The graduates who were in attendance received a surprise. During Saturday's graduation for the Class of 2021, the Commencement speaker Mike Salvino ’87 gave each graduate a Dell Latitude 3190 2-in-1 computer. Salvino made sure there were enough computers for those attending on Sunday.

The Jewett Orations, which remain a traditional part of Marietta’s Commencement, were not part of last year’s virtual commencement, so the top two placers could present at the in-person ceremony.

Menapace returned on Sunday to deliver “Embrace the Fear.”

“(Now more than four years ago) I made one of my many trips to Marietta, Ohio, with my parents the night before my first-year orientation. I found myself excited and also a tad bit nervous, which I assumed everybody else probably felt at the time,” he said. “However, the following morning was a much different story because, as I will now easily admit, I was absolutely terrified. I wanted no part of orientation or school.”

Despite his fear, Menapace decided to do something brave.

“However, after about 10 minutes I thought to myself, ‘maybe I should just embrace this fear apprehension, embrace this new opportunity and try to make something special out of it,’ ” he said. “Well, I took one step out of that hotel room and the rest was history.”

Olszewski was unable to return to campus, but submitted a video of her delivering “Climbing Mountains.”

“What senior year has brought us is preparation for the next mountain that we will climb, and while the year may not have ended the way we thought it would, we still have our cherished memories to look back on and new skills to carry into the next stage of our lives,” she said. “I learned from my backpacking trip that no obstacle is impossible to overcome and that it is okay when your plan changes because sometimes it leads you to somewhere even better. I have taken this lesson into my life and allowed it to guide me and bring me closer to finding my purpose.”

The Class of 2020 honored one faculty member — Dr. Michael Tager, Professor in Political Science, as he was presented the Outstanding Faculty Award.