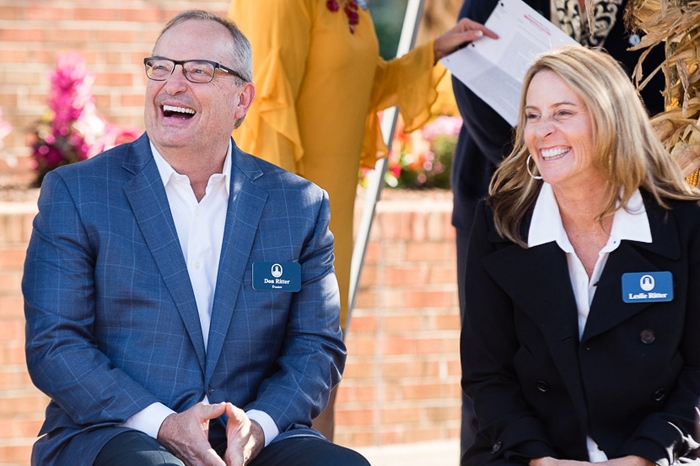 It would seem that someone as accomplished as Don Ritter ’81 couldn’t be flabbergasted.

However, that’s exactly what happened when Marietta College President William N. Ruud asked Ritter to deliver the commencement address to nearly 250 graduates on May 6th in the Dyson Baudo Recreation Center.

“I was absolutely speechless when I was asked by Dr. Ruud, and those who know me know that does not happen,” said Ritter, CEO of Endurance Resources — an oil exploration and production enterprise focused on the Delaware Basin in West Texas and Southern New Mexico. “It is by far the greatest honor I have received. It also comes with a great responsibility to impart some wisdom on the graduating class. I’m not sure I have much of that myself, but I have been blessed to pick some up along the way from others — so I’ll try to pass on what has worked for me.”

The Emeritus Trustee helped found Endurance Resources in 2008 following a successful career with Mobil Oil and then GeoMechanics International. Ritter, along with his wife, Leslie Straub Ritter ’85, made an initial $1 million donation to Marietta College in December 2016 to start a Music Therapy program. The new major was approved by the faculty in January 2018 and will begin this fall.

“We are excited and honored that Don Ritter has agreed to address our graduates this spring,” Ruud said. “Don is not only a successful businessman, but also a true renaissance man who cares deeply about the arts. His message will resonate with our graduates, as well as everyone who attends the graduation ceremony.”

Ruud said the College will present both Don and Leslie with an honorary Doctor in Humane Letters during the ceremony.

While Don has a long and distinguished career in oil and gas, he is also a director with Blue Star Connection — a charity that provides musical instruments for medically challenged children and young adults. Approximately 500 individuals and 54 hospitals have received support from Blue Star over the last 10 years.

Leslie is a principal and vice president of business solutions with Square Knot, LLC, which is a consulting firm that specializes in executive coaching, merger integration and execution, and human resource strategy. She is a two-time chair of the Marietta College Alumni Association Board, a current member of the Board of Trustees and a winner of the Young Alumna Award.

The Ritters also founded Category 5 Amplification, a custom guitar amplifier company. They started the company in January 2006 and the company’s endorsing artists include musicians Brad Paisley, Joe Bonamassa, The Kenny Chesney Band, Warren Haynes and many more. Category 5 was specifically formed to support charities and to provide musicians an avenue for giving back.

“What you give in life seems to return in blessings 10-fold. That is surely my experience at Marietta,” Don said. “It has returned to me more than I could ever give back — my family, my friends and a special place to share my gifts.”

Ritter said he hopes to share with the graduates the importance of turning their strengths into a personal vision for success and enlisting others in the journey.

“They are unique, they have a great foundation of knowledge from Marietta, but now they need a plan, a destination and a partner,” he said. “Marietta is where I learned I could do anything I set my mind to do. It is the place that opened up the world to someone who grew up in a small town with very modest means, but left me equipped as well as anyone I have met since. I learned a lot about people, how to get along with a diverse group, and the importance of connection at a deep level to an institution that gave so much opportunity to me.”

Commencement weekend begins with the traditional Strawberries & Créme from noon-1:30 p.m., Saturday, May 5th, in the DBRC, followed by the Baccalaureate Service at 2:00 p.m. in the Alma McDonough Auditorium. The graduation ceremony begins at 1:00 p.m., Sunday, May 6th.