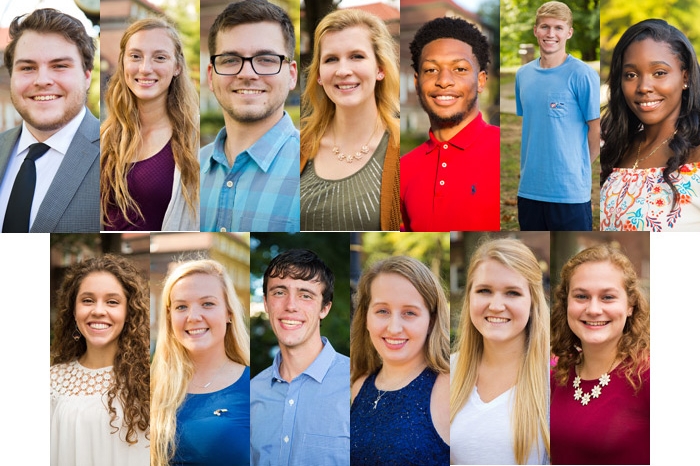 Marietta College’s student body will begin voting for the 2018 Homecoming queen and king on Thursday, October 11th during lunch and dinner hours at Gilman Dining Hall — and this year the voting should be competitive with 13 candidates.

The winners will be announced at Don Drumm Stadium during halftime of the Pioneers’ football game against Wilmington College on Saturday, October 13th. Kickoff is scheduled for 1:30 p.m. in the Ohio Athletic Conference game. The Pioneers are enjoying their best start since 1923 with a 5-0 record. A victory over Wilmington and Marietta will begin 6-0 for the first time since 1920.

Emily Birnbrich (Pataskala, Ohio)
Birnbrich is majoring in Athletic Training major and has been an active member of the Marietta College Athletic Training Student Organization for all four of her years. She has served on the executive board for two years and is the current club president. She has worked as a tutor for both athletic training and biology courses in the Academic Resource Center. She has served as an Orientation Leader and then worked as the Student Orientation Coordinator for this past summer leading Orientation Leaders in planning and executing four summer PioSOAR Orientations.

Emily Brown (Cincinnati, Ohio)
Brown is representing the Newman Community, a faith and service-based Catholic organization on campus. She is studying Health Science with minors in Chemistry and Leadership. She is also a senior representative on SGA, Philanthropy Vice President of Alpha Xi Delta, and a member of Order of Omega. This year, Brown is most excited for the Newman Community to bring a weekly mass to campus to make the church more accessible for students. She is very grateful for all of the opportunities she has had at Marietta College.

Jo Herd-Middlebrooks (Columbus, Ohio)
A member of Marietta College’s first women’s basketball team to win the Ohio Athletic Conference and reach the NCAA Tournament, Herd-Middlebrooks says, “the years I have experienced thus far I have enjoyed and loved.” She is majoring in Early Childhood Education.

Sadie Johnson (Bloomington, Indiana)
Johnson says her time at Marietta College “has definitely been one for the books.” She has enjoyed the late night heart-to-hearts in Hermann to watching the creation of the new Music Therapy program, she is happy to call Marietta “home.” She credits her friends, family, professors, her roommate (Cam Dowiak) and Don ’81 and Leslie Ritter ’85 for all of their support during her Marietta journey. “I am beyond blessed to have had these opportunities here at Marietta so far. So, here’s to playing our music too loud, crazy hair and senior year!”

Mandi Medykowski (North Olmsted, Ohio)
Medykowski is a Biology and Psychology double major with a minor in leadership. She has been a member of Alpha Xi Delta since her freshman year and has held numerous roles, including serving on the executive board. She is a member of the varsity rowing team and has been named to all-conference, as well as the academic all-conference team. Medykowski has also been a part of Student Athletic Advisory Committee, an EXCEL leader and a HOME leader, and is a part of the Beta Beta Beta biological honorary. She came to Marietta College as a legacy following her mother (Lenore Budzilek ’92) and has always considered Marietta College a second home. After graduating she hopes to attend graduate school in the field of occupational therapy.

Emily Oliver (Marietta, Ohio)
Oliver is majoring in Public Accounting with a minor in Finance. She is a member of the women’s lacrosse team, and she is also a part of the Marietta College Women’s Choir. She works in the Legacy Library at the Reference Desk. Outside of college, she is a member of Souls Harbor Baptist Church and enjoys working with the preschoolers.

Taylor Pennock (Beverly, Ohio)
Pennock, who is majoring in Economics and Management, will be the sixth member of her family to graduate from Marietta College this spring, so choosing to attend Marietta was an easy decision for her. Once on campus, she quickly became involved in numerous clubs and organizations — including Sigma Kappa, Tau Pi Phi, Omicron Delta Epsilon, Order of Omega, Gamma Sigma Alpha and Marietta College Business Association. Pennock currently serves as the President of Sigma Kappa, President of Tau Pi Phi, Vice President of Order of Omega, and a founding member of Marietta College Business Association. She has also found a passion for giving back to the community as a youth volleyball coach at the YMCA, while also working with the Advancement and Admission offices.

Emily Toppin (Stow, Ohio)
Toppin is majoring in Psychology and International Leadership studies. She is the President of Chi Omega Sorority, the Pioneer Activities Council and Omicron Delta Kappa. Toppin has also been involved in Panhellenic Council, the band and Psychology Club. She also works as an Ambassador for the Office of Advancement, a peer coach in the Communication Resource Center and in the Office of Student Life. Toppin volunteers with Live Healthy Kids and is currently doing an internship at the Washington County Juvenile Center. After graduation, she plans to attend graduate school for psychology.

Tristan Bailey (Wilmot, Ohio)
Bailey is majoring in Petroleum Engineering, and he has been an Excel Leader and an Orientation Leader. He is currently the President of the Scholars Community, co-captain of the Ultimate Frisbee Organization, Senior Class Representative on SGA and the business manager of the Alpha Psi Omega Theatre Honorary. “I’ve made great friends these past few years, and I wouldn’t trade the experiences I’ve had here at MC for anything.”

Joey Bradley (Aliquippa, Pennsylvania)
Bradley made a last-minute decision to come to Marietta and he says “it turned out to be the best decision of my life.” The second best decision was joining the fraternity, Alpha Sigma Phi. He has held various leadership positions in the fraternity, which led him to join other organizations. He is the Interfraternity Council President, New Member Education Director of Alpha Sigma Phi, a resident assistant in Harrison Hall, and a student worker for the Marietta College Police Department. He is majoring in Land & Energy Management.

Darrien Fields (Aliquippa, Pennsylvania)
Fields is a three-year starter at quarterback for the football team.

Christopher Metz (Cincinnati, Ohio)
Metz, who is majoring in Geology, is a member of Delta Tau Delta and the rowing team. He has enjoyed having the opportunity to pursue his interests and achieve his goals at Marietta.