Campus celebrates the arrival of new students during Move-In Day 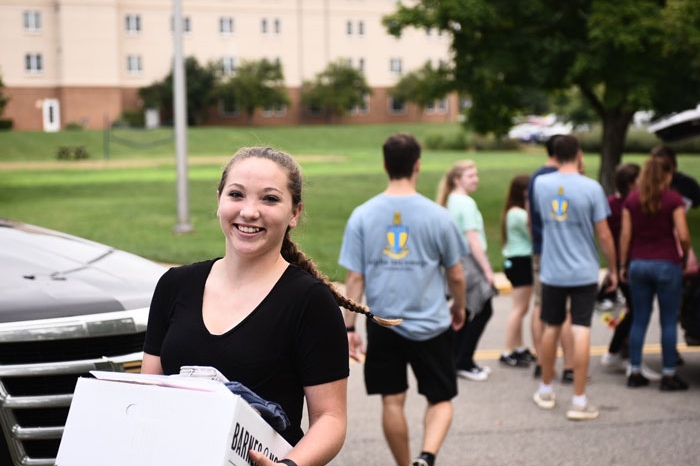 Though it took minutes to drive to campus from her home, Alexis Roberts ’22 (Marietta, Ohio) was excited to reach a special milestone in her life: Move-in Day at Marietta College.

“I’m excited but also nervous,” the Psychology major said, as she and her parents, Michelle and Kenneth Roberts, prepared to move into Russell Hall. “Marietta was my first choice and I really like the campus.”

This year, the College welcomed 400 new students, including 358 first-time students, 29 transfer students and 13 exchange students. They hail from 26 states and five countries outside of the U.S. — Brazil, Canada, China, Japan and the United Kingdom. The class is 60 percent male and 40 percent female.

“It took a few days for it to feel comfortable being here but now we’ve got things together,” Ellie said.

The three were excited to be going on the whitewater rafting trip to ACE Adventure Resort in Minden, West Virginia, this week as part of the first-year orientation program. Students could also choose to visit The Wilds — a nature preserve in Cumberland, Ohio, that features rare animal species from around the world — instead of whitewater rafting.

Shaina Thornton ’22 (St. Clairsville, Ohio), moved into her Mary Beach Hall room on Friday so she could begin cross country practice. She plans to study Athletic Training at Marietta.

Her mother, Kimber Thornton, said Marietta was not on her daughter’s radar in high school but that all changed when cross country assistant coaches Caitlin Thomas and Dee Salukombo contacted Shaina about being a Pioneer.

“It was that personal touch — that interaction with Shaina — that really made Marietta the obvious choice,” Kimber said. “And the Admission staff was also very personable and involved throughout this process. Marietta felt like home.”