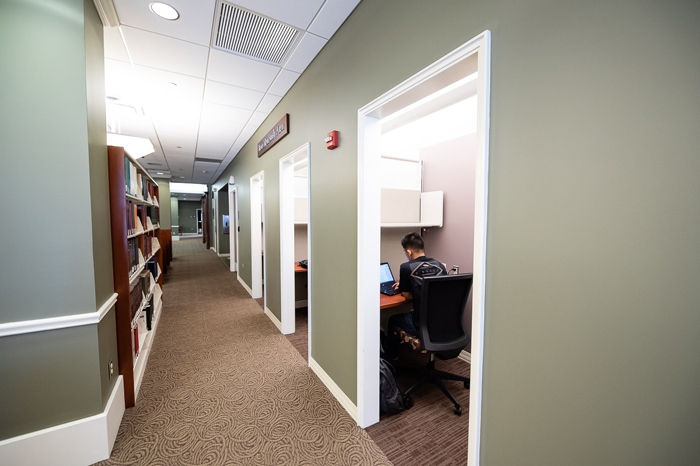 “We were delighted to honor the memory of Irene Neu by creating this new study area,” said Dr. Douglas Anderson, Director of Legacy Library. “In addition to supporting these changes, her generous bequest already funds a substantial portion of the information resources we provide for our users. And it will continue to offer us opportunities to do more in the future.”

The impetus of the renovations began when Anderson and others at Legacy Library concluded they could significantly reduce the amount of space on the main floor devoted to current periodicals and reference books, as both of those are rapidly evolving to electronic resources.

“(The study nooks) have proven to be enormously popular with students,” Anderson said. “In our recent Building Use Census, they have quickly become the most effectively used study seating in the library. We also added two additional four-seat study tables in that area for a total of five. Together these study nooks and tables comprise the Irene Neu Study Area.

“Irene was a scholar and a pathbreaker in her field,” Bland said. “She was also a great friend to the College, sharing her expertise and her financial support. We are so grateful that her generous gift to the Legacy Library helps young scholars follow their own successful academic path.”

Anderson said there were a few other renovations completed or are in progress that were also funded with Irene Neu Endowment funds. Those include restructuring the reference desk to make it more effective and allow for an expanded copier/printer area, creating a special children’s book collection area on the 2nd floor and adding technology to the large group study on the second floor so it can serve as a useful seminar room with Skype and video conferencing ability.

After graduating from Marietta in 1944, Neu went on to earn a Master of Arts at Cornell University in 1945 and a Ph.D. in 1950. She pursued a career in academe as a professor of history specializing in economic history, which culminated in a faculty appointment at Indiana University from 1964-86. She retired from Indiana with the title, Professor Emerita of History.

After her retirement, Neu returned to Marietta. In 2001, she began volunteering in the library’s Special Collections department. In connection with that, she worked to organize manuscript collections and develop finding aids, technical descriptions of collections that assist scholars in finding relevant materials.

Linda Showalter, Special Collections Associate, said Neu was instrumental in analyzing and describing the manuscripts and documents of the Ohio Company of Associates as part of a federal grant to conserve and digitize this important collection.