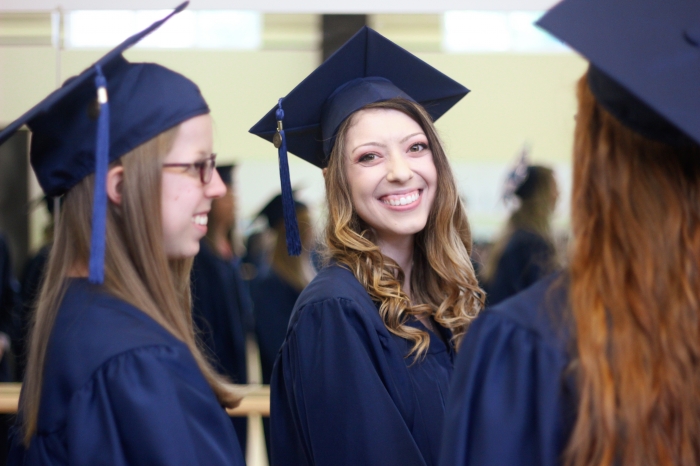 From June 2017 to July 2019, the 37 students who earned their Master of Science in Physician Assistant Studies from Marietta College on Saturday helped to deliver 184 babies, examined 74,451 patients, completed 1,001 exams and administered 1,056 shots.

Miranda Collins, the PA Program Director, recognized the many achievements of the College’s 16th class of PA graduates during their graduation ceremony, which was held in Dyson Baudo Recreation Center. While acknowledging the graduates’ hard work over the course of the past 26 months, she also noted the support and dedication they received from the faculty, clinical coordinators, administrative staff, family and friends.

After the ceremony, the graduates met for a final class photo in the Kremer Amphitheatre. Nelson, who is scheduled to take the Physician Assistant National Certifying Exam (PANCE) on August 5th, was looking forward to starting her career in either the Zanesville or Columbus area. The new graduates are eligible to take the exam seven days after graduation.

“I’m hoping to be in orthopedic surgery,” she said. “The time here flew by. It was the best thing I’ve ever done.”

Orr, who will take the PANCE on August 6th, met with her grandmother, Judi Engle after the photo.

“I plan to go into women’s health,” Orr said. “But first, I’m planning on taking a family trip to Poland.”

“I’ve known I wanted to be a PA since I was 14, and I chose Marietta College because of its PA Program,” she said.

Engle was happy to be able to watch her granddaughter earn her second degree from Marietta.

“She has worked so hard for this,” Engle said. “She’s earned it and we are all so proud.”