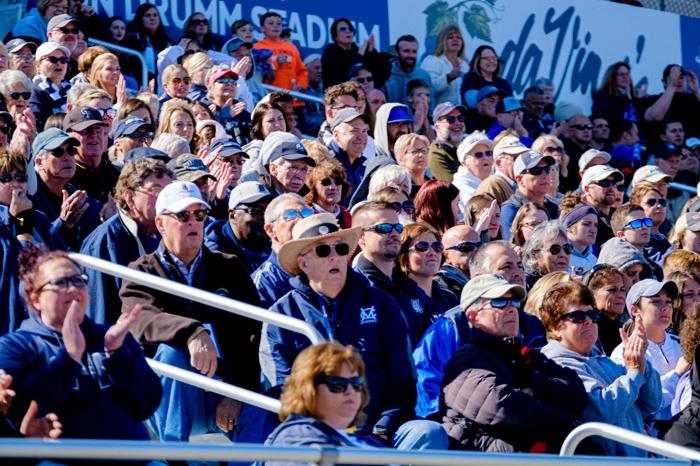 As a part of its virtual homecoming celebration — Stay HOMEcoming 2020 — this past weekend (October 16-17), the Marietta College community celebrated the hard work and perseverance of its student-athletes through a Virtual Stadium Sell-Out event to raise funds on their behalf. Just $5 bought a virtual ticket to Don Drumm Stadium, and each of the College’s athletics teams and their supporters competed to see which of them could fill up the most of the stadium’s 5,000 seats.

A generous challenge grant from an alumnus fueled the competition, offering additional prize awards of $1,000 to the team who sold the most tickets, $500 to the team with the most donors and $500 for the “Virtual Team Captain” who inspired the most fans by sharing the campaign with their network to distribute to the team of their choice.

When the event ended at noon, Saturday, October 17th, the College’s goal had been surpassed, pushing the capacity to “standing room only” and raising $28,200 in support of today’s Pioneer student-athletes.  Funds from the event were split between the designated teams and the Pioneer Club — a component of The Marietta Fund and the official fundraising unit that provides dollars to the athletic department in support of Marietta student-athletes, coaches and teams.

Additional tallies and information can be viewed at https://www.givecampus.com/schools/MariettaCollege/virtual-stadium-sell-out.

According to Marietta College Director of Athletics Larry Hiser, the new funds for the Pioneer Club will be put to immediate use supporting projects that include purchasing additional machines for the McCoy Weight Room, upgrading a locker room in Don Drumm Stadium for men’s lacrosse and converting the Harness Conference Room into a new recruiting lounge. The additional funds gifted in support of the individual teams will be used at the discretion of their coaches for team travel, gear, training and technology.

“I want to say a big thank you to the many individuals who came out to make this event and Stay HOMEcoming a success,” Hiser said. “Your support has been terrific, and it makes a big difference to our student-athletes that you are looking in on us from afar and care about their progress.”

While the athletics teams are not competing this semester, the Marietta College athletics program continues its commitment to providing the best student-athlete experience possible — with coaches working overtime to create more personal experiences that encourage the individual development of their athletes.

To showcase their work, the teams live-streamed scrimmages for Stay HOMEcoming 2020. The turn-out for these contests was tremendous, with men’s soccer garnering 857 viewers, rowing garnering 965, volleyball 370, and women’s soccer 310 watching fans. According to Hiser, the athletes continue to practice hard in anticipation of an abbreviated Fall schedule that will potentially happen in March of 2021.

For more information, or if you are interested in making a gift in support of the Pioneer Club, visit our giving page or contact Larry Hiser at larry.hiser@marietta.edu or (740) 376-4709.