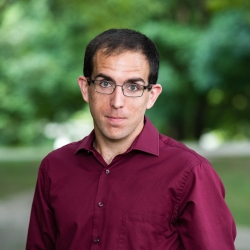 Harrison Potter was born on Sept. 28, 1986, in Rochester, New York, where he lived until graduating from Gates Chili High School in June 2004. He then enrolled in Marietta College, receiving his Bachelor of Science in May 2008 with majors in Mathematics and Physics, honors, and research honors in mathematics. That fall he enrolled in Duke University in Durham, North Carolina, receiving his Master of Arts in mathematics in May 2010 and his Doctor of Philosophy in mathematics in December 2015. In September 2014 Harrison began teaching at Marietta College as an Assistant Professor of Mathematics.

While at Duke University Harrison taught four sections of calculus and served as the mathematics department "Tea Tsar" from August 2011 through August 2013. He presented "Asymptotics of a Thermally Driven Thin Film" at the 2012 SIAM Annual Meeting and "Modeling Glass Temperature in a Tempering Furnace" at the 2013 SIAM Conference on Computational Science and Engineering. The latter presentation was the result of a collaboration with Glaston Corporation under the 2012 Mathematical Problems in Industry Fellowship. Harrison began attending the Mathematical Problems in Industry Workshop in 2011, when he also attended the Graduate Student Mathematical Modeling Camp, and returned to the workshop in both 2012 and 2013.