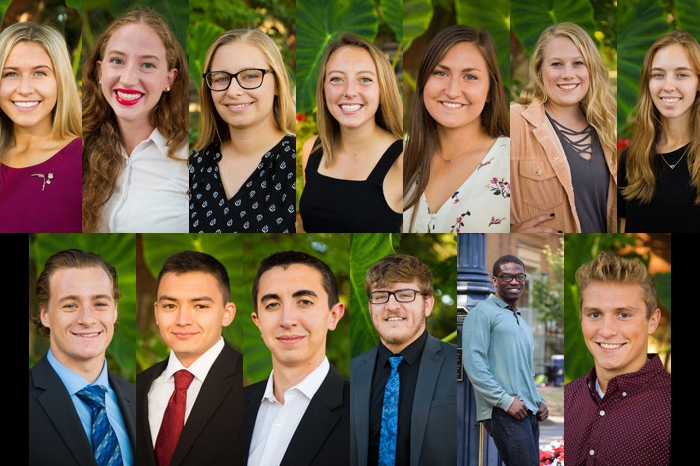 Marietta College’s student body will begin voting for the 2019 Homecoming queen and king on Thursday, October 10th during lunch and dinner hours at Gilman Dining Hall — and this year the voting should be competitive with 13 candidates.

The winners will be announced at Don Drumm Stadium during halftime of the Pioneers’ football game against Heidelberg University on Saturday, October 12th. Kickoff is scheduled for 2:00 p.m. in the Ohio Athletic Conference game. The Pioneers are 3-1 overall and 2-1 in the OAC.

Coontz, who was nominated by Alpha Xi Delta, is majoring in Biology with a minor in Leadership Studies. She is the president of her sorority and works on campus as an exam proctor and lab assistant for the Academic Resource Center. She previously served as an EXCEL leader, Orientation leader, HOME leader, Pioneer Pipeline mentor and AmeriCorps leader for Health Professions Affinity Community. She is a member of Beta Beta Beta (Biology honorary). After graduation, she hopes to attend a Physician Assistant Program.

Hill, who was nominated by Women’s Lacrosse, is majoring in both Finance and Economics. After commuting her first year, Hill is now a resident assistant in first-year housing. She has competed in the Tau Pi Phi business case competition two years in a row. She is also involved with Model UN, WCMO-TV and Chi Omega.

Kubala, who was nominated by the Marietta College Athletic Training Student Organization (MCATSO), is majoring in Athletic Training. She is an active member of MCATSO and she plans to earn a master’s degree in athletic training following graduation.

Lenington, who was nominated by Sigma Kappa, is majoring in Health Science and plans to attend a Physician Assistant program after graduation. She is the vice president of Standards and Values for Sigma Kappa, a Student Leader for the Cru Bible Study, and a member of the Gamma Sigma Alpha and Beta Beta Beta honor societies. She was also a PioSOAR Orientation Leader and HOME Leader this past summer.

Miller, who was nominated by Softball, is majoring in Athletic Training with a minor in Psychology. This spring will be her fourth year on the softball team and is a member of the Marietta College Athletic Training Student Organization (MCATSO).

Reed, who was nominated by Cheerleading, is majoring in Strategic Communication and minoring in Leadership, along with a certificate in Health Communications. She is a peer consultant at the Communications Resource Center and a member of the tennis and cheerleading teams. She transferred to Marietta College in her sophomore year and she said, “Transferring to MC was easily the best decision I made. Here I have found what I truly love studying and have made the best friends of my life. Marietta College is the best thing that’s happened to me.”

Swisher, who was nominated by Chi Omega, is majoring in Early Education and Intervention. She is president of Chi Omega and is a member of Gamma Sigma Alpha, Kappa Delta Pi, Omicron Delta Kappa and Alpha Lambda Delta. She has worked at Dyson Baudo Recreation Center and volunteered with Pioneer Pipeline.

Blaine, who was nominated by Alpha Tau Omega, is majoring in Petroleum Engineering while also earning an Engineering Leadership certificate. He is the captain of the lacrosse team, intramural sports supervisor and vice president of Alpha Tau Omega. He has spent the past two summers interning in West Virginia with Dominion Energy.

Knox, who was nominated by Brother 2 Brother, is majoring in Psychology and is a four-year starter on the football team. He has worked at the College Police Department and is president of Brother 2 Brother.

VanMeter, who was nominated by the football team, is majoring in Intervention Specialist Education. He has been a member of the football team for four years. “Throughout my college years, I have been blessed to be a part of one of the best education programs in Ohio and also have had the privilege to play for the preseason, nationally ranked Marietta Pioneers football team.”