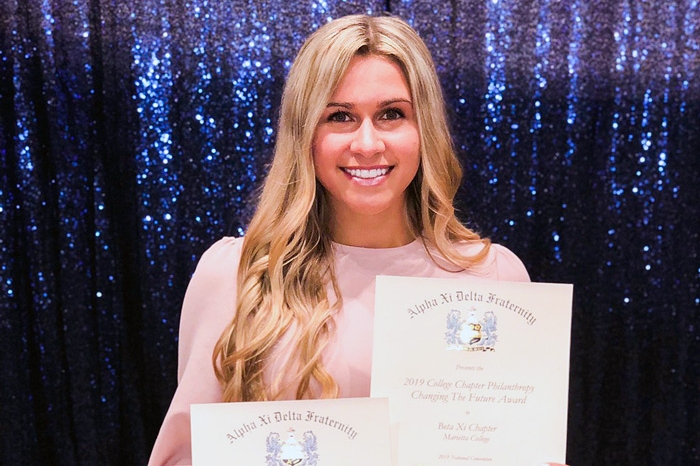 It’s the motto that reminds the women of Alpha Xi Delta to pursue excellence in everything they do… and they know how to do exactly that.

The Marietta College chapter was recently recognized at the sorority’s national convention in Seattle as they were presented with three different marks of distinction.

For outstanding fundraising performance for Autism Speaks, the partner of Alpha Xi Delta, the chapter earned the 2019 Philanthropy Changing the Future Award.

“They are a true asset to our campus and to the greater community of Marietta,” said Robert Marias, the Marietta College Greek Life Advisor. “We really couldn’t be happier for their accomplishments.”

This is the second year in a row that the College’s Beta Xi chapter of Alpha Xi Delta has earned accolades for philanthropy and academic excellence, but the first year that they won the New Member Group Award. This means that the members who joined in Fall 2018 performed remarkably well academically.

In addition to having the highest GPA of a Greek organization on campus, Alpha Xi Delta was named the 2019 Chapter of the Year at Marietta College.

“Our chapter has really pushed to make great strides this past year,” said Loren Coontz ’20 (Rootstown, Ohio), the sorority’s president. “I know our ladies are very grateful and deserving of these awards. They have worked very hard to reach the position we are currently in and I honestly could not be more proud to serve such a wonderful group of individuals.”

As they’re quite used to going the extra mile (or miles), some of Marietta’s Alpha Xi Delta sisters made the trek to Seattle to attend the convention from July 3-7. The conference consisted of educational sessions on recruitment, philanthropic event planning, personal and career development, and discussions with alumnae members.

To add to the success of Marietta’s Beta Xi Chapter, one notable alumna, Megs Yunn ’03, was given the 2019 Woman of Distinction Award this year at the convention. In 2012, Yunn launched the nonprofit organization Beverly’s Birthdays, which provides special birthday parties to homeless and needy children in the Pittsburgh area.