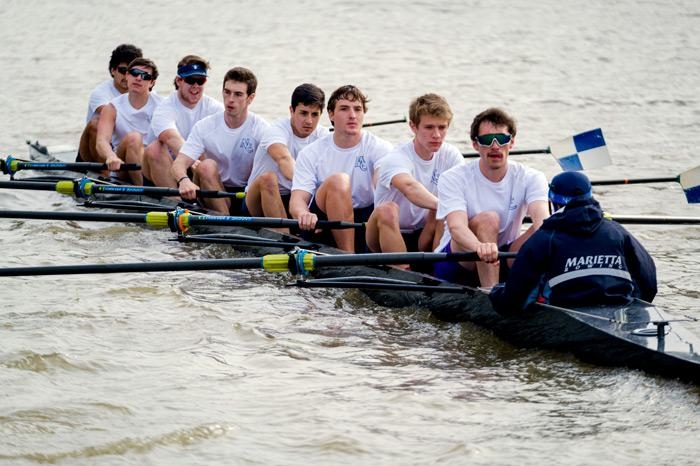 Marietta College rowing has announced that the team will work to raise $5 million in celebration of its 150th anniversary during the 2020-21 season. The money that is raised will strengthen the Marietta Rowing Operations Fund in support of the men’s and women’s rowing program — helping to fund equipment, travel, athletic training and upkeep at the Lindamood-VanVoorhis Boathouse.

The rowing program has already made significant headway toward its goal with $3 million already pledged in cash and estate gifts by Marietta College alumnus and a former coach of the Pioneer Rowing Teams, Jeffrey C. Hugel ’77, who established the endowed operations fund last fall.

Many donors wish to honor an individual by naming the endowed fund that they establish, but this was not Hugel’s goal.

“This isn’t about me or any one person,” he said. “Marietta has an incredible roster of alums who step up to support our student-athletes, and I want everyone to know they can make a difference in the team effort to grow the Marietta Rowing Operations Fund.”

The fundraising campaign is spearheaded by an Alumni Leadership Committee comprised of David Nystrom ’67, Tom Feaster ’69, Brent Haney ’76, Jeff Hugel ’77, John Strotbeck ’79, Andrea Haynes-Perry ’82, Mary Korn ’82, Kevin Suter ’85, Marc Ponchione ’96 and Zach McGurk ’11. The committee is planning a series of events that will bolster the campaign, including a virtual homecoming celebration on October 17 and an online store featuring limited-edition 150th celebration gear in support of the team.

A number of other alumni have already made anniversary gifts to the fund, and you can join them. If you would like to make a gift or pledge, please contact Josh Jacobs, Marietta College Vice President for Advancement at (740) 376-4705 or jej002@marietta.edu.

Formed in 1871, men’s rowing became the first athletic team established at Marietta College, growing to become a varsity sport in 1931. The Pioneer Navy will achieve its 150th anniversary in 2021, a milestone they are hoping to celebrate with a special reception at the prestigious Dad Vail Regatta in Philadelphia — currently scheduled for May 6-8, 2021.

The Dad Vail Regatta is the largest regular intercollegiate rowing event in the United States, held annually on the Schuylkill River and drawing more than a hundred colleges and universities from North America.

The historic Pioneer Navy is an original charter member of the Dad Vail — Marietta won the inaugural race in 1934 and has participated ever since. Last spring, when the regatta was canceled along with all NCAA Division III sports due to the COVID-19 pandemic, became the first time in its history that Marietta was unable to compete in the race.

Despite having their season cut short last year, along with the current uncertainty about what the fall season will look like, Men’s Rowing Coach Greg Myhr reports that morale remains high.

“I have coached faster teams, but I don’t think I’ve ever had a better team,” said Myhr, who joined the Marietta College Athletic Department in August 2019. “I can’t think of a single practice where they demonstrated any sign of feeling sorry for themselves. They just worked, and remained almost absurdly upbeat throughout.”

According to Myhr, any rowing that is happening in the U.S. right now is being done exclusively in singles, so his strategy for the fall is going to revolve around practicing and racing in singles.  Nonetheless, USRowing has released some updated guidelines regarding the potential move toward team boats, so there may be a chance for them to be back rowing in 4s and 8s this fall.

“It’s remarkable how excited the athletes are,” he said. “Every member of the team is demonstrating a decisive commitment to rowing, NO MATTER WHAT. Even as things get back to normal, I see this as a major part of attracting and training teams capable, not only of returning to the medal stand at the Dad Vail, but also driving a team presence at the IRA and catapulting additional Marietta athletes to our U.S. National and Olympic Teams.”

The Marietta men’s rowing program has 39 Dad Vail gold medals to its credit, including five varsity heavyweight eight golds. Its gold medal sweep of the heavyweight eight events, in 1967, is a feat that has only been accomplished twice in Dad Vail history. The men won their last championship in 2012, and Myhr has big dreams for Marietta again establishing Dad Vail dominance in the near future.

“There aren’t many programs in the country — at any level — that possess the combination of easy access to miles of protected water and the institutional will to get it done,” he said. “Marietta does. And I cannot wait to get year 150 started!”

If you would like to discuss legacy or planned giving opportunities to support rowing, please contact Josh Jacobs, Vice President for Advancement, at jej002@marietta.edu or call 740.376.4705