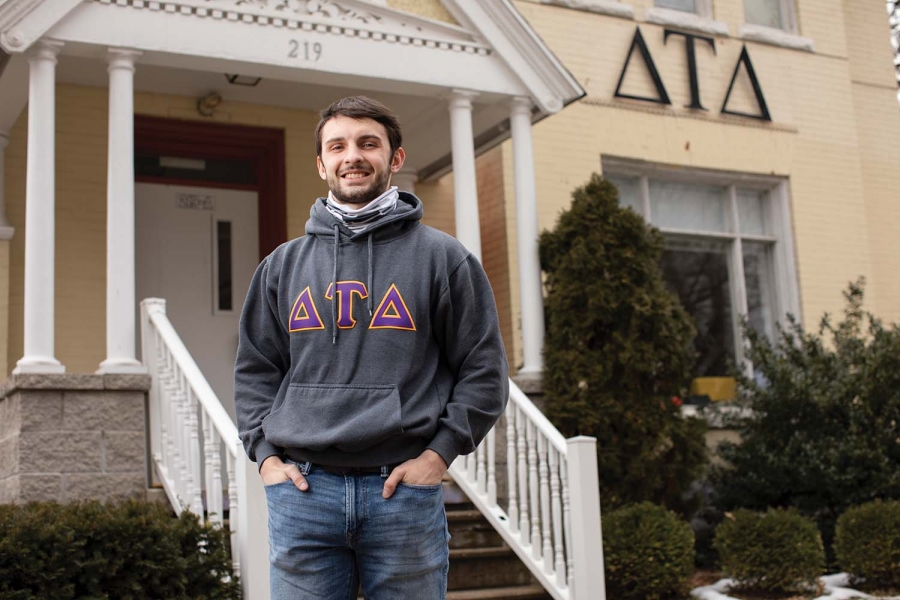 Dr. Cody Clemens ’13 didn’t think twice about providing a strong letter of recommendation for Delta Tau Delta brother Gabriel Hehr ’23 for a spot on the national fraternity’s Undergraduate Council. At the start of the academic year, Hehr learned that he was appointed to serve as an at-large member of the Undergraduate Council for a two-year term.

“So, my role for the UGC is to be one of the 11 voices to provide thoughts and opinions on how our fraternity can improve and what we believe is working already,” Hehr says. “For me, I’ve made it a goal to be the voice of Marietta College Delta Tau Delta-Epsilon Upsilon Chapter. Whatever could help our chapter, and potentially other chapters around the nation, I want to let our Undergraduate Council know and the National Arch Chapter know.”

Clemens, who is the former Assistant Chapter Advisor and current Assistant Professor of Communication, says Hehr’s appointment is an impressive accomplishment, particularly because Hehr is only the third brother from Marietta’s Epsilon Upsilon Chapter to be named to the UGC in the chapter’s 52-year history.

“When I saw the call for nominations, I immediately thought of Gabe for the Undergraduate Council. With his charisma, quick wit, and dedication to the mission and values of Delta Tau Delta, I knew he would represent Marietta College well at the national level,” Clemens says.

“I chose Delta Tau Delta because they seemed like they had a very diverse mix of personalities and lifestyles that I loved seeing, because I try to be as social as possible and get to understand and find connections with different people,” Hehr says. “I also was impressed at how their reputation was on campus. I had noticed that many members were leaders of clubs or organizations on campus and I saw it as an opportunity to open myself up for leadership success — of which this position I am in now for the UGC is a good example — and academic success. Knowing that my brothers and I have each other’s backs, makes my decision to join Delta Tau Delta at Marietta College one of the best decisions in my life.”